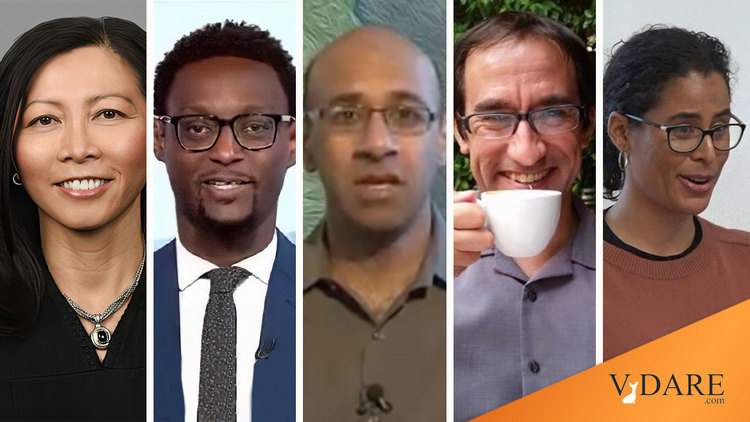 Earlier: Miranda Warning: Vietnamese Refugee Judge Rules That An Immigration Law That Traces Back To Icky White Men Is Unconstitutionally Racist Because Mexicans Break It Most Often

Courts are beginning to admit that some immigration laws are racist

Hassan Kanu writes about access to justice, race, and equality under law. Kanu, who was born in Sierra Leone and grew up in Silver Spring, Maryland, worked in public interest law after graduating from Duke University School of Law. After that, he spent five years reporting on mostly employment law. He lives in Washington, D.C. Reach Kanu at hassan.kanu@thomsonreuters.com

… Judge Miranda Du of the U.S. District Court for the District of Nevada dismissed on Aug. 18 a case against Gustavo Carrillo-Lopez, who was indicted for being in the U.S. after previously being deported. Du held that Carrillo-Lopez had shown that the reentry law was “enacted with a discriminatory purpose and that the law has a disparate impact on Latinx persons.” The government failed to show it “would have been enacted absent racial animus.”

The ruling is a momentous judicial acknowledgment of the plainly racist and nativist underpinnings of laws, like the Immigration and Nationality Act of 1952, that criminalize reentry. It marks a rare admission by the courts that foundational elements of the federal immigration machinery – enforcement processes we now take for granted – actually clash with constitutional equal protection guarantees,

After all, the 14th Amendment clearly states that “equal protection of the laws” means that all Mexican nationals have the right to immigrate to the United States and receive affirmative action privileges while white American citizens don’t have the right to pass laws against that.

and perpetuate a stigmatizing disparate impact on Latinos and Hispanic people.

It’s also a recognition that courts can and should strike down laws motivated by bias, especially given the prevalence of approaches to law enforcement that are inextricably linked to race and identity, like drug-crime sentencing.

And murder. And rape.

Moreover, Mr. Carillo-Lopez is (as far as the U.S. legal system officially knows) a nonviolent heroin and cocaine smuggler. Nonviolent.

Ahilan Arulanantham, professor and co-director of the Center for Immigration Law and Policy at the University of California, Los Angeles School of Law, told me the ruling is significant culturally because it airs out “incredible archival and legislative history of these laws, which is really very sordid and just racist.”

… That history was laid out in Carrillo-Lopez’s case by UCLA historian Kelly Lytle Hernandez and Benjamin Gonzalez O’Brien, a political scientist at San Diego State University.

… I asked Gonzalez O’Brien whether it’s fair to say that it’s generally accepted among historians and political scientists that U.S. immigration laws of today have racist underpinnings.

“Yeah, because if you look at that history in this country, it’s fundamentally impossible to separate race and racism from immigration policing,” Gonzalez O’Brien said. “The desire to shape the racial and cultural characteristics of this country is deeply intertwined with our immigration policy.”

And Lytle Hernandez would tell you the same thing.

In fact, Miranda Du, Hassan Kanu, Ahilan Arulanantham, Benjamin Gonzalez O’Brien, and Kelly Lytle Hernandez would all point out that there is nothing worse than white American citizens using immigration policy to shape the racial and cultural characteristics of this country.

On the other hand, there is nothing better than Miranda Du, Hassan Kanu, Ahilan Arulanantham, Benjamin Gonzalez O’Brien, and Kelly Lytle Hernandez using immigration policy to shape the racial and cultural characteristics of this country.

Look, it’s really simple: there is bad white racism and there is good anti-white racism. Is that so hard to understand?