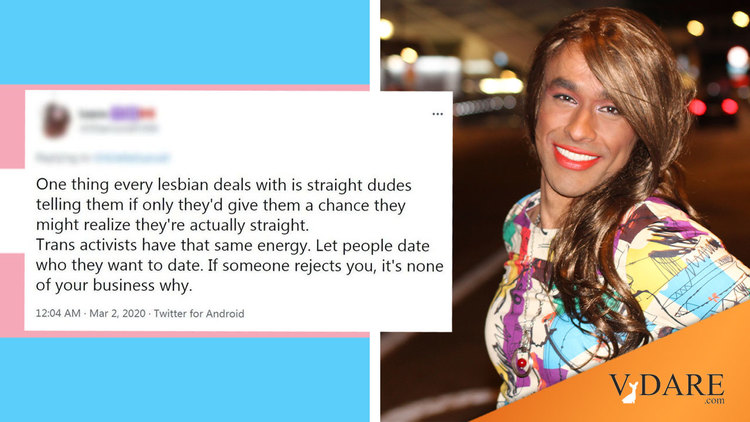 ‘We’re being pressured into sex by some trans women’

Is a lesbian transphobic if she does not want to have sex with trans women? Some lesbians say they are increasingly being pressured and coerced into accepting trans women as partners – then shunned and even threatened for speaking out. Several have spoken to the BBC, along with trans women who are concerned about the issue too.

Personally, I can never remember what terms like “trans women” and “trans men” mean since they could equally likely have opposite meanings. Instead, I use the comic-book redolent term “ex-men” for heterosexual dudes, often highly aggressive high IQ ones, who have a sex fetish about dressing up as a woman while still having sex with women. (The ex-men are different from the drag queen types who have been highly effeminate since childhood and who are sexually oriented toward catching a man.)

Getting hit on by men in dresses with a line of politically correct patter has been a problem for lesbians for decades. Back in the 20th century, the Michigan Womyn’s Music festival banned ex-men from its premises so that lesbians could just sit in folding chairs and listen to the Indigo Girls without getting pestered by men in frocks insinuating that if they were really good feminists they’d tear down the “cotton ceiling.”

That worked okay for 40 years, until the Michigan Womyn’s Musical festival got steamrolled by Trans Power during the Great Awokening. From Wikipedia:

Michfest’s stated intention of admitting only “womyn-born womyn”[6] and excluding transgender women led LGBT advocacy group Equality Michigan to boycott the event in 2014 and drew criticism from the Human Rights Campaign, GLAAD, the National Center for Lesbian Rights, and the National LGBTQ Task Force. The festival held its final event in August 2015.

“I’ve had someone saying they would rather kill me than Hitler,” says 24-year-old Jennie*.

“They said they would strangle me with a belt if they were in a room with me and Hitler. That was so bizarrely violent, just because I won’t have sex with trans women.”

Jennie doesn’t think this should be controversial, but not everyone agrees. She has been described as transphobic, a genital fetishist, a pervert and a “terf” – a trans exclusionary radical feminist.

“There’s a common argument that they try and use that goes ‘What if you met a woman in a bar and she’s really beautiful and you got on really well and you went home and you discovered that she has a penis? Would you just not be interested?'” says Jennie, who lives in London and works in fashion.

“Yes, because even if someone seems attractive at first you can go off them. I just don’t possess the capacity to be sexually attracted to people who are biologically male, regardless of how they identify.”

…. Ultimately, it has been difficult to determine the true scale of the problem because there has been little research on this topic – only one survey to my knowledge. However, those affected have told me the pressure comes from a minority of trans women, as well as activists who are not necessarily trans themselves.

They described being harassed and silenced if they tried to discuss the issue openly. I received online abuse myself when I tried to find interviewees using social media.

How many ex-men have a good laugh after their ridiculous arguments work on confused young women? Or do ex-men tend to be so self-righteous, narcissistic, and entitled that they think they deserve to dress up like a woman and have sex with women?