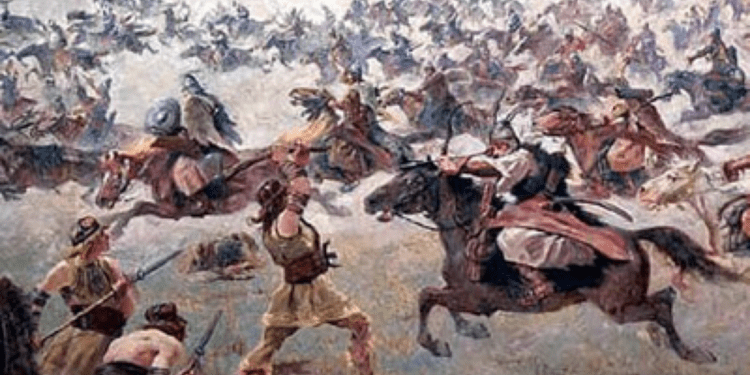 NATIONAL GEOGRAPHIC: Genocide Is a Small Price to Pay for Invasion

Genetic tests of ancient settlers’ remains show that Europe is a melting pot of bloodlines from Africa, the Middle East, and today’s Russia.

The idea that there were once “pure” populations of ancestral Europeans, there since the days of woolly mammoths, has inspired ideologues since well before the Nazis. It has long nourished white racism, and in recent years it has stoked fears about the impact of immigrants: fears that have threatened to rip apart the European Union and roiled politics in the United States.

Now scientists are delivering new answers to the question of who Europeans really are and where they came from. Their findings suggest that the continent has been a melting pot since the Ice Age. Europeans living today, in whatever country, are a varying mix of ancient bloodlines hailing from Africa, the Middle East, and the Russian steppe.

The evidence comes from archaeological artifacts, from the analysis of ancient teeth and bones, and from linguistics. But above all it comes from the new field of paleogenetics. … In the process any notion of European genetic purity has been swept away on a tide of powdered bone.

The horsemanship the Yamnaya brought to Europe lives on in their native region. A rider at the Zaporizhzhya Cossack Museum on Ukraine’s Khortytsya Island demonstrates the acrobatic skills that made the Cossacks such feared warriors from the 1400s on.

Three major movements of people, it now seems clear, shaped the course of European prehistory. Immigrants brought art and music, farming and cities, domesticated horses and the wheel. They introduced the Indo-European languages spoken across much of the continent today. They may have even brought the plague. The last major contributors to western and central Europe’s genetic makeup—the last of the first Europeans, so to speak—arrived from the Russian steppe as Stonehenge was being built, nearly 5,000 years ago. They finished the job.

The Aryan invaders also 90% finished off the originators of Stonehenge, but look on the bright side. Being genocided is a small price to pay for being invaded. Think of all the innovative mutton cuisine that the Aryan conquerors must have brought with them.

In an era of debate over migration and borders, the science shows that Europe is a continent of immigrants and always has been. “The people who live in a place today are not the descendants of people who lived there long ago,” says Harvard University paleogeneticist David Reich. “There are no indigenous people—anyone who hearkens back to racial purity is confronted with the meaninglessness of the concept.” …

Within a few centuries, other people with a significant amount of Yamnaya DNA had spread as far as the British Isles. In Britain and some other places, hardly any of the farmers who already lived in Europe survived the onslaught from the east. In what is now Germany, “there’s a 70 percent to possibly 100 percent replacement of the local population,” Reich says. “Something very dramatic happens 4,500 years ago.” …

“To me, the new results from DNA are undermining the nationalist paradigm that we have always lived here and not mixed with other people,” Gothenburg’s Kristiansen says. “There’s no such thing as a Dane or a Swede or a German.” Instead, “we’re all Russians, all Africans.”

In other words, when the Nazis invaded the Soviet Union on June 22, 1941, they were just Yamnaya reclaiming their ancestral homeland. So nobody should have got so upset.

As we know now, the Fundamental Right to Invade is just Science.

In my 2018 review of David Reich’s book, I offered a demurral against the the increasingly popular idea that we should hold ourselves in the 21st Century to the moral standards of the genocidal steppe barbarians of 2500 BC.

But then I’m an extremist nutjob, so I would prefer rule of law to invasion.