NATO Failures Do Not Go Unnoticed

On Thursday, European leaders were not happy to hear President Trump verbally smack them for being deadbeats regarding their agreed-upon NATO responsibilities. The members are supposed to spend two percent of GDP on defense but few actually do, leaving Uncle Sucker to do the heavy lifting.

This problem has been going on for years. Its beginning can be traced to America’s handling of Europe’s defense needs following WWII as a part of rebuilding politically and keeping the place safe from predatory Russkies. The Europeans got used to the idea of a generous US paying their defense tab, which allowed them to build lavish welfare states in recent decades. At this point, Europe’s liberal ruling elites have become politically infantilized by their assumption that the US will protect them.

Below, the deluxe new NATO headquarters in Brussels cost well over a billion dollars and illustrates the bureaucratic focus of the organization. Check out the video virtual tour to see the extravagance. 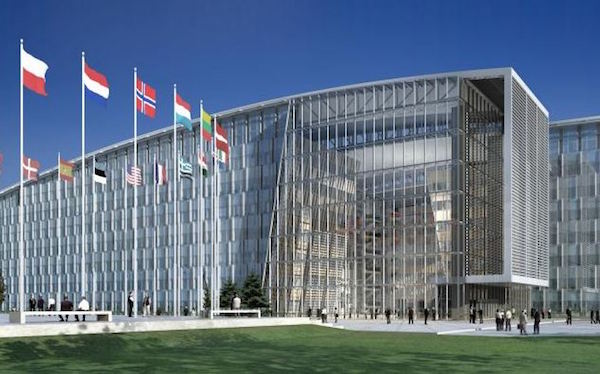 On Thursday, retired General Jack Keane expressed his disgust with NATO’s failure to fulfill its primary mission of protecting Europe.

JACK KEANE: Most of them lack moral and national will to defend their own people. It’s actually shameful what has taken place with NATO. ISIS has successfully conducted 32 attacks against eight NATO countries, killing hundreds of NATO citizens. And you have the head of NATO in the Wall Street Journal today saying that terrorism is threatening our values, our freedom and our very way of life. And yet in the same article he says but we’re not going to be involved in combat operations against ISIS. That is fundamentally a lack of will, and these are feckless leaders who are not going to stand up and defend their people.

This is how far NATO has dropped in terms of its effectiveness. After hundreds of people are killed, they’re still not willing to ask their soldiers to go out and risk their lives to protect their own citizens. That is the problem that Mr. Trump has with NATO. While he has financial issues with them to be sure — their not taking up the burdens financially of supporting the alliance — the real issue that’s even more significant is the lack of political and moral will.

Below is the Wall Street Journal opinion piece from NATO Secretary-General Jens Stoltenberg that Jack Keane mentioned, reprinted in Australia. It sounds tough enough most of the way through, but in the third paragraph from the end, the author states, “It would not mean NATO involvement in combat operations.”

In short, the top NATO honcho believes the life-threatening combat missions are the responsibility of the Americans, not Europeans. And that’s the problem in today’s Europe — the lack of will for self-defense.

We never said it was easy, but NATO will triumph over terror, The Australian, By Jens Stoltenberg in the Wall Street Journal, May 26, 2017

At first glance, it’s simply a fragment of twisted metal outside NATO’s new headquarters in Brussels. But this 2m-long section of steel girder was recovered from the ruins of the World Trade Centre. At its official unveiling today, we will hail the artefact as a symbol of solidarity: Europe and North America standing together.

Two years ago I spoke at the 9/11 Memorial in New York. Being there, at the site of the attacks, reinforced my firm belief that however much terrorists try to divide us, they will only succeed in uniting us.

This is exactly what happened after 9/11. For the first time ever, NATO allies invoked our collective defence clause, Article 5. We recognised those shocking assaults on the US as an attack against us all.

In the days that followed, NATO planes patrolled US skies. Within weeks, troops from NATO allies deployed to Afghanistan to ensure that country would never again be a haven for international terrorists. The biggest combat operation in NATO history was launched in direct response to the 9/11 terrorist attacks.

Since then, hundreds of thousands of Europeans, Canadians and troops from partner countries have stood shoulder-to-shoulder with their US comrades in Afghanistan. More than 1000 have paid the ultimate price. Many more have suffered life-changing injuries.

At this moment, approximately 13,000 troops from 39 NATO and partner countries are training Afghan security forces to stabilise the country.

And at a meeting of NATO leaders in Brussels today we will discuss how we can step up our fight against terrorism.

We never said it would be easy. On my visits to Afghanistan, I have witnessed the challenges, as well as the progress made. I was particularly impressed by my meeting with young Afghan women training to become pilots. I heard them express pride in what they are doing and appreciation for NATO’s support.

While NATO’s contribution to the fight against terrorism effectively began in Afghanistan, it now extends far wider.

NATO surveillance planes are supporting the coalition to defeat the so-called Islamic State. Iraqi troops trained by NATO to defuse improvised explosive devices are putting their skills to use in the battle for Mosul. We have taught soldiers counter-terrorism and counter-insurgency tactics in countries such as Egypt, Jordan, Mauritania and Morocco. And our highly skilled troops are helping Tunisia develop its own special forces.

Earlier this year, we opened a regional centre in Kuwait to enhance co-operation with our Gulf partners. We are also developing a new operational hub at our command in Naples, Italy, to improve our ability to anticipate and respond to crises in the region.

At our headquarters in Brussels we have set up a new intelligence and security division to improve our understanding of the threats we face.

At the same time, we are strengthening ties with the EU and UN. Both organisations’ counter-terrorism capabilities complement our own. And we are working hard throughout the alliance to make our societies more resilient to attack.

While I am very proud of what NATO is already doing in the fight against terrorism, I also believe NATO can do more. For instance, we have learned from our experiences in Afghanistan and elsewhere that training local forces is one of the best weapons we have in the fight against terrorism. It is far better, and more sustainable, to help our neighbours to stabilise their countries themselves. And if our neighbours are more stable, we are more secure. These efforts must be expanded.

There are other possibilities. Although NATO has assisted the coalition fighting Islamic State, it does not have a formal role. Having one would allow NATO to support political discussions in the coalition.

It would also improve co-ordination, for example, with training and capacity-building activities. It would not mean NATO involvement in combat operations.

We are also considering expanding our support to airspace surveillance for the coalition. An expanded training and capacity-building role for NATO’s special forces and the creation of a dedicated counter-terrorism intelligence cell are also under consideration.

Terrorism affects every NATO ally. It is a long-term threat to our values, freedom and way of life. And the alliance is ready to do more to counter this threat. The unique bond between Europe and North America has delivered unprecedented peace for almost seven decades, and NATO’s role in the fight against terrorism is an important chapter in that story.

Jens Stoltenberg is the secretary-general of NATO