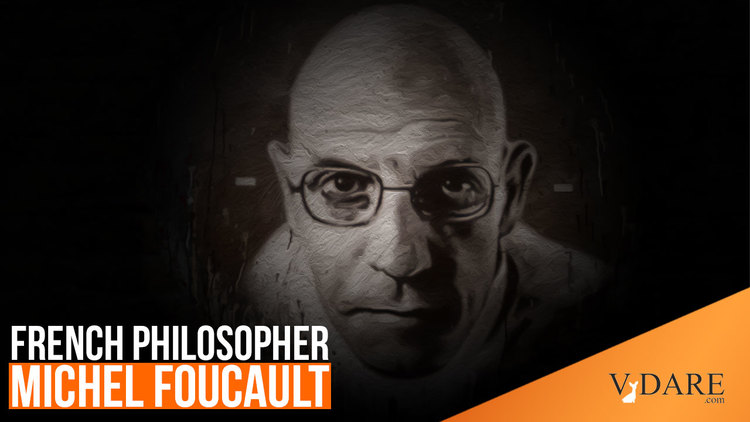 From the Sunday Times of London news section:

The philosopher Michel Foucault, a beacon of today’s “woke” ideology, has become the latest prominent French figure to face a retrospective reckoning for sexually abusing children.

A fellow intellectual, Guy Sorman, has unleashed a storm among Parisian “intellos” with his claim that Foucault, who died in 1984 aged 57, was a paedophile rapist who had sex with Arab children while living in Tunisia in the late 1960s.

Foucault missed out on all the fun in Paris in May 1968 because he was pursuing his own fun by teaching that year in Tunisia. North Africa was the place for gay European intellectuals to go because you could get away with pretty much anything there, rather how Mexico once served bohemian American artists like William Burroughs, who got away with shooting his wife in the head in Mexico City in 1945 (although, to their credit, several Mexican cops thought the escape of the rich and connected gringo wife-killer was a disgrace). Now persona non grata in Mexico, Burroughs set up shop in Tangier in the 1950s.

My 2019 profile of Foucault, “The Whip Hand,” noted the convenient connection between his ideology and his predilections:

Another cause to which Foucault devoted himself was liberating children to have sex with grown men. In France, the age of consent in 1977 was only 15 years old, but Foucault nevertheless signed a petition, along with Jean-Paul Sartre, Simone de Beauvoir, and Jacques Derrida, to decriminalize pedophilia.

Foucault did a 1978 radio interview to promote the abolition of age-of-consent laws in France. It’s noteworthy how smoothly Foucault’s usual arguments on other topics service this campaign.

For example, Foucault begins with his usual tactic of making the assertion that history shows that something that might seem like common sense (making child molestation illegal) was only recently socially constructed, so therefore it could (and thus should) be deconstructed:

This regime is not as old as all that, since the penal code of 1810 said very little about sexuality, as if sexuality was not the business of the law….

How do we know, Foucault goes on, that the child didn’t want to be the victim of statutory rape?

And who is to say who is a child?

In any case, an age barrier laid down by law does not have much sense.

In arguing for the legalization of boy bothering, Foucault never quite gets around to claiming that age is just a social construct, but that’s the mood music.

How much of Foucault’s vast intellectual enterprise of denouncing categorization of individuals as possessing distinct identities was intended to undermine the legal category of children too young to consent? Did Foucault happen to dream up his ideas first and only then realize that his logic proved that it should be legal for him to have sex with boys? Or did he want to have sex with boys first and then dreamt up his vast system of justification?

Foucault himself once said:

In a sense, all the rest of my life I’ve been trying to do intellectual things that would attract beautiful boys.

Foucault was an evil man.

But he was right about something: that power helps you control discourse and controlling discourse helps you have power.

Today, though, it’s Foucault’s fans who have the whip hand.