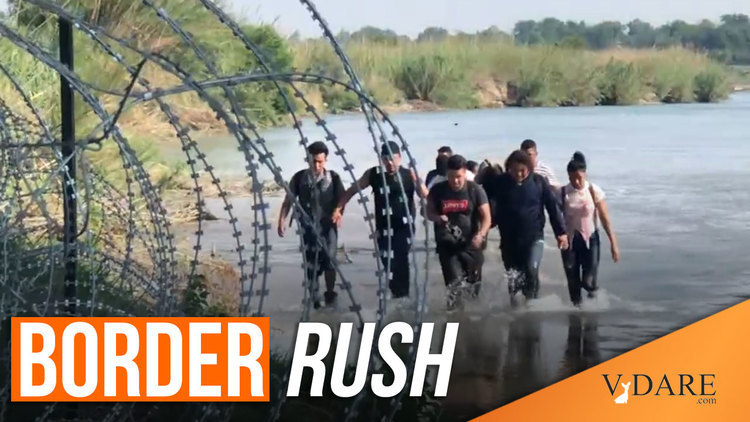 If Traitor Joe Biden and his subalterns were stupid or “incompetent” or “failures,” as some Stupid-Party Conservatism Inc. critics say, the regime would, at least once in a while, do something right. But alas, the Brandon Regime has done nothing right, particularly on immigration. Thus is the latest from the departments of State and Homeland Security completely unsurprising. Foreigners linked to terrorists or terrorism, even those who provided material support to terrorists, will be admitted to the country. This is suicidal madness, done in the name of “national security,” and suggests that the Biden-Mayorkas Axis of Evil plan is to import a significant number of Muslim “migrants.”

Biden to allow some migrants with terrorist ties into country in immigration policy shift that raises security concerns. | Just The News https://t.co/JFB5YSjYAo

You read that right. Cuban-Jewish immigrant and unindicted visa fraudster Alejandro Mayorkas, the DHS secretary, is importing terrorists [Exercise of Authority Under Section 212(d)(3)(B)(i) of the Immigration and Nationality Act, FederalRegister.gov].

“Inadmissibility” will “not apply with respect to an individual who provided”:

(1) insignificant material support (i.e., support that was minimal in amount and inconsequential in effect); or (2) limited material support under circumstances involving certain routine commercial transactions, certain routine social transactions (i.e., in the satisfaction of certain well-established or verifiable family, social, or cultural obligations), certain humanitarian assistance, or substantial pressure that does not rise to the level of duress, to a designated terrorist organization …  or to any member of such organization, and provided that the individual satisfies the relevant agency authority that the individual:

(a) Did not voluntarily and knowingly engage in terrorist activity on behalf of a designated terrorist organization; …

(c) Has undergone and passed all relevant background and security checks; ...

(e) Has not provided the material support with any intent or desire to assist any terrorist organization or terrorist activity;

(f) Has not provided material support that the individual knew or reasonably should have known could directly be used to engage in terrorist or violent activity;

(g) Has not provided material support to terrorist activities that they knew or reasonably should have known targeted noncombatant persons, U.S. citizens, or U.S. interests;

(h) Has not provided material support that the individual knew or reasonably should have known involved providing weapons, ammunition, explosives, or components thereof, or the transportation or concealment of such items;

(i) Is not otherwise inadmissible ...;

(j) Poses no danger to the safety and security of the United States; and

(k) Warrants an exemption from the relevant inadmissibility provision(s). …

This determination is based on an assessment related to the national security and foreign policy interests of the United States as they apply to the particular persons described herein and shall not have any application with respect to other persons or to other provisions of U.S. law.

The obvious problem is defining “insignificant material support,” “minimal in amount and inconsequential in effect,” “limited material support,” “totality of the circumstances,” and so on. It does without saying we cannot trust what a terror-linked immigrant says about his “intent” or “desire.”

The obvious question is why a DHS chief and his president would permit anyone connected in any way to any terrorist or terrorist organization entry into the United States.

Answer: To import radical Muslim “migrants” to help The Great Replacement. They can join MS-13 and other criminal illegal aliens to wage war on and demoralize the Historic American Nation.

So again, Biden and his gang are not “failures” or “incompetent.” They’re succeeding, not failing. They’re doing this purposely. It’s treason.

Message for the Stupid Party: Add this to the list of reasons to impeach the whole bunch.