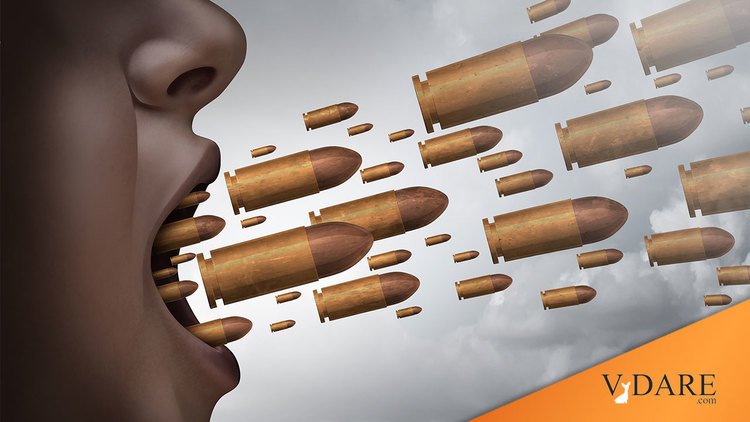 New Zealand PM: Free Speech Is A Weapon Of War

New Zealand is a country in collapse. Much like former Anglosphere outposts Rhodesia and South Africa, the country is turning its back on its Anglo roots. Much like Rhodesia, which for a brief time was the ludicrous state of Zimbabwe-Rhodesia, New Zealand is considering a combination name, New Zealand-Aotearoa. Obviously, that would be a placeholder until it is just Aotearoa, a nation by, for, and about the Māori.

Prime Minister Jacinda Ardern is almost a parody of the AWFL (Affluent White Female Liberal), with her default expression permanently set on the brink of sobbing. Her xenophilia would be comical if it were not so devastating. She subscribes to the usual Narrative regarding crimes. If a white person did something bad, it is the fault of whatever he read, which needs to be banned. If a non-white does something, it’s an isolated incident by an individual and no larger conclusions can be drawn. Either way, whites are victimized.

During the COVID-19 pandemic, she delighted in the petty tyrannies the disease provided her to inflict on the population. However, her wave of popularity has passed. She still enjoys a positive approval rating, but the number of people who disapprove of her performance is higher than that of opposition party leader Christopher Luxon, leader of the National Party [Luxon’s approval rating up, but disapproval also rising, Otago Daily Times, September 28, 2022].

Naturally something must be done about this. So the Prime Minister went to the United Nations and compared online speech to weapons of war which must be controlled by an international organization. It’s hard to write calmly about this, for it is an open call to tyranny.

At the U.N. General Assembly on Friday, Ardern announced a new initiative ”to help improve research and understanding of how a person’s online experiences are curated by automated processes,” saying the work, done in partnership with companies and non-profits, will be ”important in understanding more about mis- and disinformation online — A challenge that we must as leaders address...”

”After all, how do you successfully end a war if people are led to believe the reason for its existence is not only legal but noble? How do you tackle climate change if people do not believe it exists? How do you ensure the human rights of others are upheld, when they are subjected to hateful and dangerous rhetoric and ideology?” she asked.

Ardern then suggested that online speech is a weapon often used by those with evil intent.

”The weapons may be different but the goals of those who perpetuate them is often the same. To cause chaos and reduce the ability of others to defend themselves. To disband communities. To collapse the collective strength of countries who work together,” she claimed.

Yet it’s mass immigration that has broken the community of New Zealand, turning it into a squabbling group of tribes, including the race-based Māori party. As New Zealand and other Anglosphere countries break their ties with Britain, they are also abandoning the natural-born liberties of Englishmen. Instead, the victim-based morality will determine who and what can be said and who can speak.

Worse, it’s not that the government is trying to protect the truth. It’s trying to ban people who speak the truth. Hard truths about human biodiversity, the negative impact of immigration, or, dare I say it, even some of the negative side effects of the vaccination program can’t be uttered if the ruling class has the power to determine what can and cannot be said. If such a program is in place, the states underneath it can in no way be called free or legitimate.

We don’t have to live like this, subject to the neuroses of hysterical leaders who seek to inflict their emotional instability on the nations they rule. We are on the wrong track throughout the Anglosphere and the West. English-speaking peoples have a special responsibility to rekindle our historic ties and unity, built around powerful symbols like the British Empire, the monarchy, the flags that the successor regimes have ditched, and most important, the traditional liberties that England gave to the world. We also must unite to preserve our demographic dominance in the states we created, that no one else could have.

If a ”leader” wants to give all that away, there’s an old word for what she is. That word is traitor.

If a ”leader” wants to take away the right to discuss political issues, there’s a word for that too. That word is tyrant.

Ardern may not like me saying that but it doesn’t change the reality. A leader who won’t let her people peacefully discuss political ideas is no more than a thug; worse, because she couches her aggression in the smarmy language of victimhood. She doesn’t even have the integrity to take responsibility for the force she wants to employ against political opponents. The Anglosphere must awaken to itself and no longer tolerate such petty bandits masquerading as leaders of great nations built by better men.