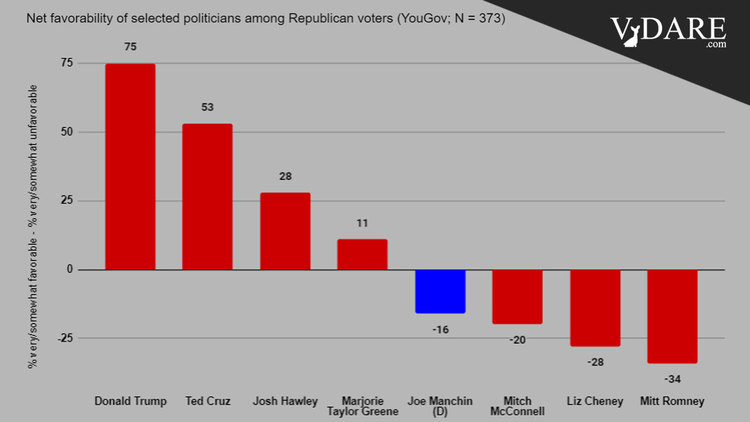 No Votes For NeverTrumpers: Republicans Like Democrat Joe More Than Mitt, Mitch, or Liz

There is no battle for the hearts and minds of the GOP electorate being waged. Trumpism has won decidedly. The idea that there is a McConnell/Romney/Cheney wing on one side and a Cruz/Hawley/Greene wing on the other among voters is fake news. The merchants of mendacity are lying when they frame it this way. The subsequent graph shows the latest YouGov net favorability ratings among Republican voters: Similarly, Civiqs daily tracking shows net favorability among Republicans for Trump at +79 and for McConnell at -37. That’s an utterly staggering difference.

The GOP’s voters are literally more favorably inclined towards moderate Democrats than they are towards the party’s non-Trumpian establishment leaders. The GOPe has the procedural power for the time being, but unless the 2024 Republican primaries are rigged harder than elections in Turkmenistan, the anti-Trumpers don’t have a prayer.