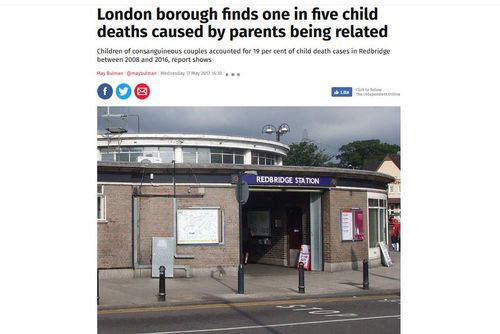 From the UK Independent:

Children of consanguineous couples accounted for 19 per cent of child death cases in Redbridge between 2008 and 2016, report shows

One in five child deaths in an east London borough have occurred because the mother and father are related, a report has found.

Redbridge Council found deaths of children from parents who were known consanguineous couples – meaning second cousins or more closely related – accounted for 19 per cent of 124 cases reviewed in the borough between 2008 and 2016.

“Chromosomal, genetic and congenital abnormalities”, which are known to occur in offspring of interfamily relationships due to a heightened risk of certain genetic disorders, were identified as the causes of the deaths in a report by the borough’s Child Death Overview Panel (CDOP). …

Nine per cent of the children who died were from families with Pakistani origins – a group that had the highest rates of consanguineous parents, at 50 per cent, according to the report.