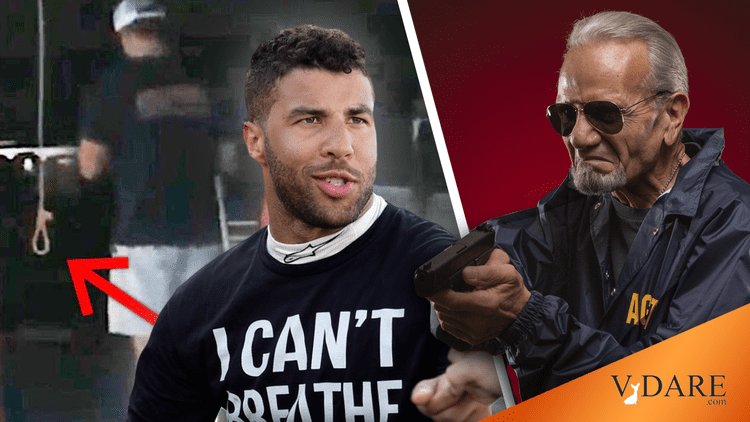 As reported in a recent VDARE.COM article, NASCAR publicly banned the private use of the Confederate battle flag at any of its races or other events.

The star of the Confederate flag takedown was Bubba Wallace, a mulatto driver who has never won a top-level NASCAR race and got where he is through NASCAR's Affirmative Action program called "Drive for Diversity." Bubba told Don Lemon in an interview that the Confederate flag should be banned, and what do you know, two days later it was banned. (That interview might have been a setup).

On Sunday June 21st, at the Talladega Speedway, it was reported that a noose was found in Bubba Wallace's garage stall.

This immediately became a Big Deal for NASCAR and the media.

"We are angry and outraged, and cannot state strongly enough how seriously we take this heinous act. We have launched an immediate investigation, and will do everything we can to identify the person(s) responsible and eliminate them from the sport."

"The U.S. Attorney's office for the Northern District of Alabama, FBI and the Department of Justice Civil Rights Division are reviewing the situation surrounding the noose that was found in Bubba Wallace's garage to determine whether there are violations of federal law," US Attorney Jay E. Town said in statement. "Regardless of whether federal charges can be brought, this type of action has no place in our society." [Dept. of Justice looking into noose found in NASCAR star Bubba Wallace's garage stall, by Amir Vera, Eric Levenson and Dianne Gallagher, CNN, June 22, 2020]

“On Monday [June 22], fifteen FBI special agents conducted numerous interviews regarding the situation at Talladega Superspeedway. After a thorough review of the facts and evidence surrounding this event, we have concluded that no federal crime was committed. The FBI learned that garage number 4, where the noose was found, was assigned to Bubba Wallace last week. The investigation also revealed evidence, including authentic video confirmed by NASCAR, that the noose found in garage number 4 was in that garage as early as October 2019. Although the noose is now known to have been in garage number 4 in 2019, nobody could have known Mr. Wallace would be assigned to garage number 4 last week. The decision not to pursue federal charges is proper after reviewing all available facts and all applicable federal laws. We offer our thanks to NASCAR, Mr. Wallace, and everyone who cooperated with this investigation.”

It took 15 special FBI agents to discover that the "noose" was really a loop on a rope with the nefarious purpose of pulling a garage door down.

The FBI could have just consulted The Last Refuge website, which investigated this incident and figured it out by the 22nd. Or maybe the FBI did consult it, I don't know.

Nowadays if you want a real investigation, consult "marginal" blogs and websites.

If you're interested in this topic, i recommend the fine investigative work found in these two reports from The Last Refuge:

What's really ridiculous about all this is how easy it was to solve. Didn't all the other drivers - who joined in the great public display of support for Bubba - know that garages in Talladega had loops/"nooses"?

Couldn't this "problem" have been solved in minutes?

It's almost as if NASCAR wanted this to happen, to dramatize its struggle with "racism."

Here's some good analysis from that June 23 Last Refuge piece:

[I]t’s important to understand the scale of the multi-billion vested interests that surround this now international scandal based on accusations of fake hate; a racially driven hoax. There are lots of credibility and money at stake. So with all of that context the big questions now surround motive. What would be the motives for the NASCAR team of Bubba Wallace to create a racially divisive hoax? What are the benefits and what would they accomplish? Additionally, what would the motives be for NASCAR to promote a racial hoax with the intensity we have witnessed over the past two days? What would be the motive of NASCAR President Steve Phelps?

The Last Refuge quotes an article in which NASCAR President Steve Phelps is interviewed by Auto Week Racing editor Matt Weaver. It says that NASCAR is discovering "its place in modern American pop culture" (that is, a new place, not the old place in Southern American culture) and a goal is to promote NASCAR in a new way.

With a NASCAR goal to “discover its place in modern American pop culture” what better way to “promote this sport in a way we haven’t in the past,” than to go in search of a new audience. Perhaps the social justice community.

The Last Refuge asks why nobody in NASCAR pointed out the obvious.

Here’s another alarming part. Not a single driver or race crew could point out that all of this nonsense was created over a garage door pull-down rope tied into a loop? Those “nooses” are clearly visible in a bunch of NASCAR garage bays.

In other words, why couldn't one driver or pit crew member say "Hey, these garage door ropes have loops! Could that be what this was?"

Is that level of willful blindness the result of a herd mentality where everyone knows the problem, but the false narrative has been pushed so hard that no-one wants to be ‘that guy’ who points out the obvious. Is the racial sensitivity and peer pressure that strong in NASCAR?

Keep in mind the FBI responded to this hate hoax almost immediately; and yet what should have been, at best, outlined as a misunderstanding & solved in minutes has been allowed to drag out through the media for days…. while a toxic racial narrative is driven.

At the least, NASCAR should have apologized for letting it snowball as much as it did. But no.

“The FBI has completed its investigation at Talladega Superspeedway and determined that Bubba Wallace was not the target of a hate crime. The FBI report concludes, and photographic evidence confirms, that the garage door pull rope fashioned like a noose had been positioned there since as early as last fall. This was obviously well before the 43 team’s arrival and garage assignment. We appreciate the FBI’s quick and thorough investigation and are thankful to learn that this was not an intentional, racist act against Bubba. We remain steadfast in our commitment to providing a welcoming and inclusive environment for all who love racing.” [NASCAR statement on FBI investigation at Talladega Superspeedway, Official NASCAR Release, June 23, 2020]

Translation: OK, this turned out to be fake. But we're still keeping an eye on all these racist Southerners who have supported us all these years. And notice, SJWs, we're not like them!