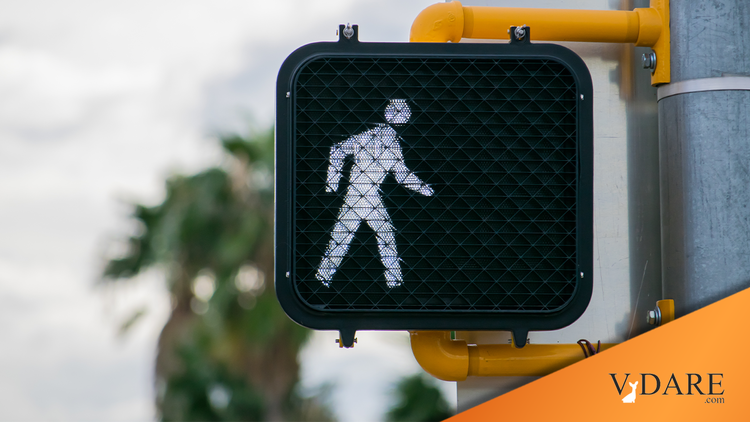 Not A Parody: White Walking Man Signal Icons Are Racist

The Unintentional Racism Found in Traffic Signals
Just because something doesn’t use an offensive mascot doesn’t mean it can’t reinforce a broken system
David Kaufman, July 6

David Kaufman is an American journalist who writes for several influential publications, including the Financial Times, The New York Times, Details, New York and some of the premiere international publications, including Time International.[1] He appears regularly on the Fox News business network.[2] He wrote the Wallpaper* guide to Tel Aviv that was published by Phaidon Press.[3] Kaufman’s mother is Jewish and of European ancestry and his father was African-American. He obtained his Bachelor of Arts in sociology and Near Eastern studies from Brandeis University and his Master’s degree in journalism from New York University. He lives in New York City and is openly gay.

Back to Mr. Kaufman’s essay:

… But what about the far more subtle streams of everyday racism that course through our homes, our workplaces, and the outside world? These instances may be far subtler than a mascot or an offensive term, but are no less pervasive — and no less deserving of cultural reckoning.

For me, this reckoning begins with traffic signals.

A few months back, before Covid-19 kept us in our homes and George Floyd made us take to the streets, I was walking with a friend, her daughter, and my twin sons. My friend is White and I’m not — something I’d never given a second thought until we reached a crosswalk. “Remember, honey,” she said to her daughter as we waited for the light to turn green, “we need to wait for the little White man to appear before we can cross the street.”

I realize that White people like to exert control over nearly everything everyone does, I thought, but since when did this literally include trying to cross the street?

Part of my surprise here was a function of age. My boys are a few months younger than her daughter and we hadn’t yet tackled the “crossing the street” component of basic toddler training. But as a Black dad, I was struck by the language at play. How is it possible that well into the 21st century, parents all over Manhattan — well-meaning, #BLM-marching parents — are teaching their children to ask “little White men” for permission to cross the street? And why doesn’t this seem to bother them?

It certainly bothered me — so much so that I began to dig deep into my fortysomething consciousness to try and remember if I was raised asking a little White guy to let me cross the street. Were these the words my progressive White mother used to teach her little Brown children the fundamentals of pedestrian safety? Turns out, I wasn’t raised this way — and neither, most likely, were you.

Back when most of us were kids, stop lights and traffic signals across the U.S. typically relied on words, rather than images, to let folks know when to walk or wait or stop or cross. Go comb through photos of “historic traffic signals” on Google Images, and you’ll see archival photos of traffic signs you might remember from childhood: Boxy black consoles that lit up with words like “walk” or “don’t walk” in imposing all-caps lettering.

… A “hominoid” is how the folks at the FHWA initially described him, though later they referred to him as a gender-neutral “Walking Person’”— an icon that actually dates back to the 1940s. At that time, “walk” and “don’t walk” typified traffic signage, but began to be phased out because words could be misunderstood by increasingly globalized populations. “The use of icons instead of words on traffic signs has been a slow but steady evolution for decades because they improve universal comprehension,” an FHWA spokesperson says. “This is not a recent development.”

In fact, the Walking Person’s first major move actually took place in 1971 when it became enshrined in the Manual on Uniform Traffic Control Devices — the FHWA bible — as an alternative to the words “WALK” and “DON’T WALK.” For the next four decades or so, our little friend slowly, informally replaced its outdated predecessors until 2009; that’s when the Walking Person finally became the FHWA standard and, as the spokesperson says, “the option to use words is no longer permitted in newly installed signals.” One day soon, every traffic signal will contain the Walking Person, along with its counterpart: the bright red hand telling folks not to walk.

My recollection is that he used to be the Little Green Walking man to go along with the Green Means Go idea. But red-green colorblindness is not uncommon, so they switched to a brighter white color.

Close. It’s “lunar white,” according to the FHWA: a shade of white with yellow and grey accents that mimics the color of the moon. Lunar white wasn’t chosen because it sounds cool. According to FHWA research, the agency spokesperson says, moonlight offers “the peak sensitivity for the rod cells in the human retina.” In other words, our vision is predisposed to favoring the clarity and intensity of moonlight.

In the end, it’s not that the Walking Man is so super-duper white. Rather, his true competitive edge is that he’s super-duper bright. “The use of bright colors… offers the greatest contrast against a dark background,” the FHWA spokesperson says. “They do not lend themselves to confusion with other colors [and] are thought to provide the greatest level of comprehension and safety.”

And there you have it: The government-approved origins of the “little White men” telling us to cross the street at corners across New York. Thanks to help from the FHWA, I am now convinced that technology and necessity, rather than some anti-Black conspiracy, propelled the shift from verbal crosswalk cues to a lunar-white Walking Person. But my heart still sinks at the specter of teaching my sons to ask a White man for permission to do — well, anything. Because so much of the world already insists that we do.