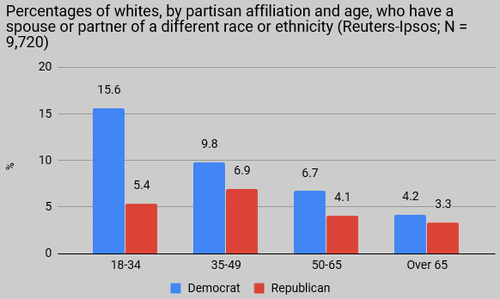 Not Coming Together—White Republicans Are Still Not Intermarrying

Joe Sobran famously quipped “in their mating and migratory habits, liberals are indistinguishable from members of the Ku Klux Klan.” That observation, astute for its time, is covered in dust and growing moldy. The percentages of whites, by age, who have a non-white spouse or partner:

Just 1-in-20 young white Republicans are flirting with the idea of having children who don’t look like them. Have a white pill, then.

It’s often observed that, absent immigration, political conservatism would win in the US because white Republicans have more kids than white Democrats do.

We can take that a step further. Given the zeitgeist’s flight-from-white and non-white one-drop rule, the 1.2 children resulting from white leftist miscegenation will identify almost without exception as non-white. Due to the heritability of political beliefs, this will have the effect of ‘purging’ the most racially-unaware and racially-masochistic whites from whiteness as it is culturally understood. The anti-white hatred dial will be turned up that much faster but the remaining whites will be less susceptible to self-hatred than whites in the current year are.

The clarification before the storm.