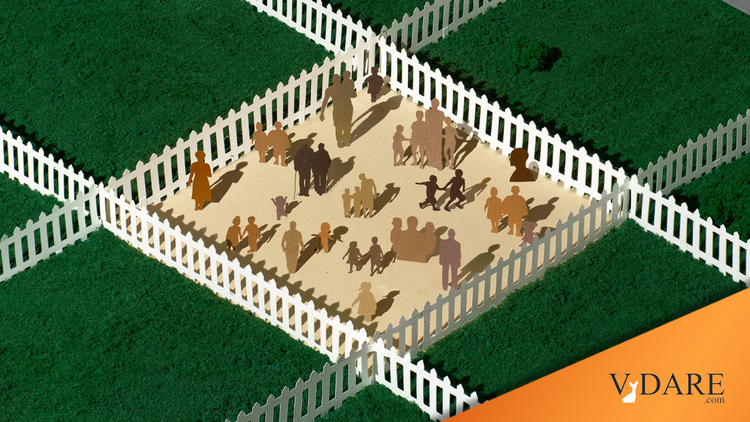 San Mateo is a lovely suburban city of 104,000 between San Francisco and Palo Alto, with a median household income of $115,000. From the New York Times opinion section:

The Black Lives Next Door

A new generation of activists is trying to figure out where to concentrate its efforts. Residential desegregation is the final frontier.

By Richard Rothstein
Mr. Rothstein is the author of “The Color of Law: A Forgotten History of How Our Government Segregated America.”

Black Lives Matter protests have laid a foundation for real change. But in their aftermath, activists in San Mateo and similar communities mostly lack a continuing program to tackle the comprehensive racial inequality that allows abusive police practices to flourish. …

San Mateo is a segregated Silicon Valley city. Ms. Heath observes that there are no Black families in her Hillsdale neighborhood. San Mateo’s few remaining African-Americans mostly live in another neighborhood, where they have long been concentrated. One percent of Hillsdale High School students are Black.

Well, actually, it’s more complicated than that. Even though this NYT essay only mentions whites and blacks, there are other races in San Mateo. According to the Census Bureau:

It turns out that San Mateo is only 43.1% non-Hispanic white.

That raises the question of: how did all those non-whites move to San Mateo despite restrictive covenants and redlining? Well, it turns out — crazy as it sounds — that there haven’t been restrictive covenants for over 70 years and redlining for over 50 years. Moreover, if you read between the lines, you’ll notice that a lot has changed over the last half century, even though you mostly just read in the newspapers about late-breaking Emmett Till news.

Ms. Heath says she would like to live in a more diverse neighborhood. The way to do that, she says, is to insist that the City Council provide more affordable housing — subsidized units for low-income families — in her neighborhood. That would be a step forward, but most African-Americans are not poor; working- and middle-class Black families whose incomes are too high to qualify for existing subsidies were also excluded from neighborhoods like Hillside because of their race.

Effective strategies to redress segregation in all its forms would become clearer if activists in San Mateo and elsewhere did deep research into how their communities’ racial boundaries were established.

In San Mateo, they would learn that builders constructed the residential Hillsdale neighborhood for whites only in the mid-20th century. Public records reveal that the 1941 deed to Sophia Heath’s family home says, “No persons other than members of the Caucasian or White race shall be permitted to occupy any portion of said property, other than as domestics in the employ of the occupants of the premises.”

The racial restriction was signed by officers of the American Trust Company, which financed its construction. David D. Bohannon, a developer who built the largest share of homes in Hillsdale, signed similar deed requirements for racial exclusion. Although the whites-only clauses are no longer enforceable

, they remain in the deeds of Hillsdale homeowners.

These clauses are like the racist objects in the attic that haunt the nightmares of New York Times subscribers. You can just sense their emanations of evil.

… The Bohannon company, Fox & Carskadon and the American Trust Company could not have segregated Hillsdale without the support of government agencies. In fact, in some cases, federal agencies required builders like Mr. Bohannon to insert the racial clause in deeds. In our own time, the City of San Mateo continues to perpetuate the segregation of many of its white neighborhoods by prohibiting construction of anything but single-family homes — no townhouses, duplexes or apartments affordable to teachers, firefighters, nurses, hotel and restaurant workers, and others who serve the community but cannot afford to live in it.

The American Trust Company and Wells Fargo merged in 1960. Coldwell Banker acquired Fox & Carskadon in 1995. Perhaps Sophia Heath’s fellow young activists and their adult compatriots might embark on a campaign to persuade the Bohannon company, Coldwell Banker and Wells Fargo to face up to their considerable responsibility for the racial segregation and lack of opportunity for Black families that characterize San Mateo.

A local civil rights movement can insist that these businesses make substantial contributions to a fund that subsidizes African-Americans to purchase Hillsdale homes that would have been affordable when these institutions excluded Black home buyers but no longer are.

Token contributions will do little. The fund will have to be substantial. Fox & Carskadon advertised its Hillside houses for $5,450, about $100,000 in current dollars. But today those homes sell for about $1.5 million, sometimes more. Shouldn’t Bohannon, Coldwell Banker and Wells Fargo find the funds to enable African-Americans who qualify for a mortgage on a $100,000 property to purchase Hillsdale houses worth $1.5 million?

You see, if there hadn’t been a restrictive covenant enforceable until the late 1940s, then lots and lots of of great grandparents of today’s blacks would have bought houses in San Mateo, hung on to them for over 70 years, kept them in perfect condition, not caused any problems with the property value, and bequeathed them free and clear to today’s blacks.

That’s just how the world works.

Seriously, if you wonder why the Diversity Inclusion Equity (DIE) people switched their buzzword from equality to equity, it’s because they want to take your equity in your house.