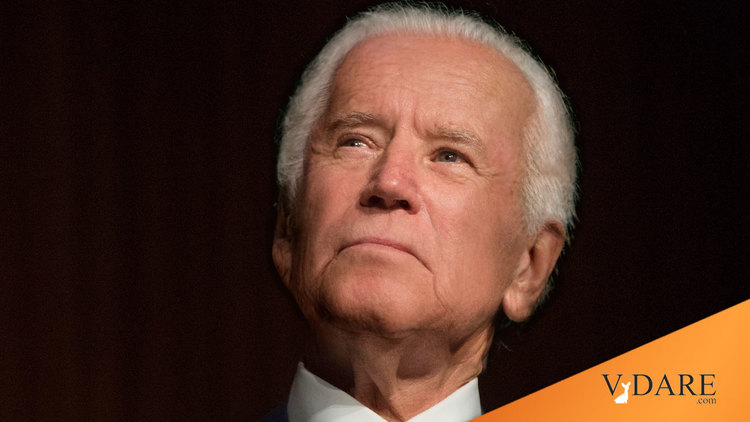 NYT: Biden Is NOT Too Old Now, But Next Term?

At 79, Biden Is Testing the Boundaries of Age and the Presidency

President Biden has said he plans to run for a second term, but his age has become an uncomfortable issue for him and his party.

WASHINGTON — … But the reality is that managing the schedule of the oldest president in American history presents distinct challenges. And as Mr. Biden insists he plans to run for a second term, his age has increasingly become an uncomfortable issue for him, his team and his party.

Just a year and a half into his first term, Mr. Biden is already more than a year older than Ronald Reagan was at the end of two terms. If he mounts another campaign in 2024, Mr. Biden would be asking the country to elect a leader who would be 86 at the end of his tenure, testing the outer boundaries of age and the presidency. Polls show many Americans consider Mr. Biden too old, and some Democratic strategists do not think he should run again.

It is, unsurprisingly, a sensitive topic in the West Wing. In interviews, some sanctioned by the White House and some not, more than a dozen current and former senior officials and advisers uniformly reported that Mr. Biden remained intellectually engaged, asking smart questions at meetings, grilling aides on points of dispute, calling them late at night, picking out that weak point on Page 14 of a memo and rewriting speeches like his abortion remarks on Friday right up until the last minute.

Well, they would say that. On the other hand, Biden did fine debating Trump a couple of years ago.

One of my concerns is that Biden realizes he’s old and so he doesn’t call BS on the Latest Thing as much as he would have done in the past: You don’t hear him saying: “This transgender stuff is BS, right?” “No, a black man didn’t invent the lightbulb.” “These ‘mostly peaceful protests’ are riots, of course.” But now he knows he’s old and he’ll never understand all this new-fangled nonsense, so he lets the young people in his Administration promote disastrous stuff instead of firing them for being idiots.

But they acknowledged Mr. Biden looks older than just a few years ago, a political liability that cannot be solved by traditional White House stratagems like staff shake-ups or new communications plans. His energy level, while impressive for a man of his age, is not what it was, and some aides quietly watch out for him. He often shuffles when he walks, and aides worry he will trip on a wire. He stumbles over words during public events, and they hold their breath to see if he makes it to the end without a gaffe.

Although White House officials insist they make no special accommodations the way Reagan’s team did, privately they try to guard Mr. Biden’s weekends in Delaware as much as possible. He is generally a five- or five-and-a-half-day-a-week president, although he is called at any hour regardless of the day as needed. He stays out of public view at night and has taken part in fewer than half as many news conferences or interviews as recent predecessors.

The press has access to Presidents’ daily schedules. Why not some quantitative analysis of how early Biden calls a lid on the average day compared to Trump, Obama, Bush, Clinton, Bush I, and Reagan?

…“I do feel it’s inappropriate to seek that office after you’re 80 or in your 80s,” said David Gergen, a top adviser to four presidents. “I have just turned 80 and I have found over the last two or three years I think it would have been unwise for me to try to run any organization. You’re not quite as sharp as you once were.”

Uh-oh, David Gergen is saying it.

Everyone ages differently, of course, and some experts put Mr. Biden in a category of “super-agers” who remain unusually fit as they advance in years.

Maybe…maybe not. Biden didn’t look young for his age when he was a 30-year-old U.S. Senator. Back in the 1970s, he looked kind of like a character played by John Cazale.

Over time, though, Dr. Jill has gotten him high quality cosmetic procedures like his hair plugs, so he recently looked quite good for his age through his VP years before his recent decline.

On the cognitive front, Joe was never super bright, so he has less of a margin of safety.

“Right now, there’s no evidence that the age of Biden should matter one ounce,” said S. Jay Olshansky, a longevity specialist at the University of Illinois Chicago who studied the candidates’ ages in 2020. “If people don’t like his policies, they don’t like what he says, that’s fine, they can vote for someone else. But it’s got nothing to do with how old he is.”

Still, Professor Olshansky said it was legitimate to wonder if that would remain so at 86. “That’s the right question to be asking,” he said. “You can’t sugarcoat aging. Things go wrong as we get older and the risks rise the older we get.”

… In a June survey by Harvard’s Center for American Political Studies and the Harris Poll, 64 percent of voters believed he was showing that he is too old to be president, including 60 percent of respondents 65 or older.

Mr. Biden’s public appearances have fueled that perception. His speeches can be flat and listless. He sometimes loses his train of thought, has trouble summoning names or appears momentarily confused. …

Republicans and conservative media gleefully highlight such moments, posting viral videos, sometimes exaggerated or distorted to make Mr. Biden look even worse. But the White House has had to walk back some of his ad-libbed comments, such as when he vowed a military response if China attacks Taiwan or declared that President Vladimir V. Putin “cannot remain in power” in Russia.

Mr. Biden was famously prone to gaffes even as a younger man,

In other words, Joe was never a mental giant. Instead, he was a guy who grabbed the main chance by getting himself elected U.S. Senator from a tiny state at age 29.

and aides point to his marathon meetings with families of mass shooting victims or his working the rope line during a trip to Cleveland this past week as evidence of stamina. …

During his European trip last month, foreign leaders followed his lead while protectively treating him like a distinguished elderly relative. At a photo opportunity, Chancellor Olaf Scholz of Germany gently pointed Mr. Biden in the direction of the cameras. Just before a meeting, a reporter twice shouted a question about getting grain out of Ukraine. When Mr. Biden could not hear the question, Boris Johnson, the British prime minister, rescued him. “We’re working on it,” Mr. Johnson responded. …