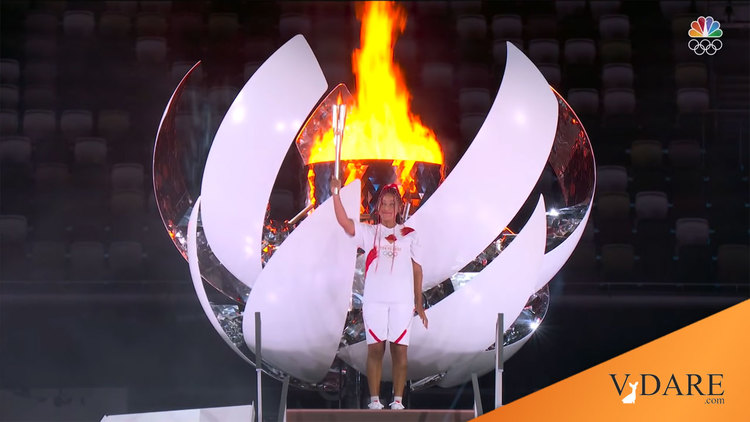 The tennis star, who lit the Olympic cauldron, took a drubbing on social media, with some questioning her identity or right to represent the country.

“Motoko Rich” would be a good name for a villainess in a James Bond movie.

TOKYO — Just four days after Naomi Osaka mounted the stairs to light the Olympic cauldron, presented as a symbol of a new, more inclusive Japan, that image was undermined on Tuesday by a backlash that followed her surprise defeat in Tokyo.

Many Japanese were stunned by Ms. Osaka’s third-round loss to Marketa Vondrousova of the Czech Republic after she had been favored to take the women’s tennis gold medal on home soil.

But as the face of a Summer Games riddled with scandal and anxiety over an unstinting pandemic — Tokyo posted a record number of new coronavirus cases on Tuesday — Ms. Osaka took a drubbing on Japanese social media, with some questioning her identity or right to represent the country at all.

“I still can’t understand why she was the final torchbearer,” one commenter wrote on a Yahoo News story about her loss. “Although she says she is Japanese, she cannot speak Japanese very much.” Several comments like that one that were harshly critical of Ms. Osaka were given “thumbs up” by 10,000 or more other Yahoo users.

As the Japanese-born daughter of a Haitian American father and a Japanese mother, Ms. Osaka has helped to challenge Japan’s longstanding sense of racial and cultural identity.

She has been enormously popular in Japan, and some online commenters voiced support for her on Tuesday. The news media covers her victories extensively, and her face appears on advertisements for Japanese products ranging from Citizen watches to Shiseido makeup to Nissin Cup Noodles.

Her selection as the final torchbearer at the opening ceremony on Friday demonstrated how eager the Olympic organizers were to promote Japan as a diverse culture. The Washington Wizards star Rui Hachimura, who is of Japanese and Beninese descent, also featured prominently as a flag-bearer for the Japanese Olympic team. But in some corners of society, people remain xenophobic and refuse to accept those who don’t conform to a very narrow definition of what it means to be Japanese.

And they must be hunted down and dealt with.

Ms. Osaka may have also touched some nerves when she pulled out of the French Open in May after a dispute with tennis officials over her decision not to appear at a news conference. She then revealed on Instagram that she had struggled with depression and anxiety.

Many of the online comments in Japan following her loss on Tuesday referred disparagingly to her mental health.

“She conveniently became ‘depressed,’ conveniently healed, and was given the honor of being the final torchbearer,” wrote one commenter on Twitter. “And then she loses an important game just like that. I can only say that she is making light of sports.”

Mental health is still something of a taboo subject in Japan. Naoko Imoto, an education specialist at UNICEF who is an adviser on gender equality to the Tokyo organizing committee and a former Olympian who swam for Japan, said in a news briefing on Monday that mental health was not yet well understood in Japan.

Whereas in the United States, we understand mental health perfectly, which is why the mental health of young women has gotten worse during the Great Awokening.

… Some of the comments about Ms. Osaka seemed to echo conservative criticism in the United States of the movement for racial justice, which the tennis star has vocally supported.

“Her selection as the final torchbearer was wrong,” wrote another commenter on the Yahoo News story about Ms Osaka’s loss. “Was the theme of the Tokyo Games human rights issues? Is it to show Japan’s recovery and show appreciation to the many countries which supported Japan? BLM is not the theme. I don’t think she was able to concentrate on the match, and she deserved her defeat.”

Nathaniel M. Smith, an anthropologist at Ritsumeikan University in Kyoto who studies right-wing movements in Japan, said that online critics could now copy from a global pool of commentary.

“A Japanese online right-winger is aware from being in the Twitter environment of both Black Lives Matter but also how white people critique Black Lives on Twitter,” Mr. Smith said. “So there is this shared digital repertoire of how to attack.”

Whew, it turns out that white people are to blame after all. I was worried their that the article was criticizing non-white people. But now it appears that whites are at the root of the mean tweets about Naomi Osaka’s flop.

By the way, why did the press decide that the verb to describe what conservatives do is “pounce?” Are conservatives really known for their cat-like agility? Seems rather complimentary…