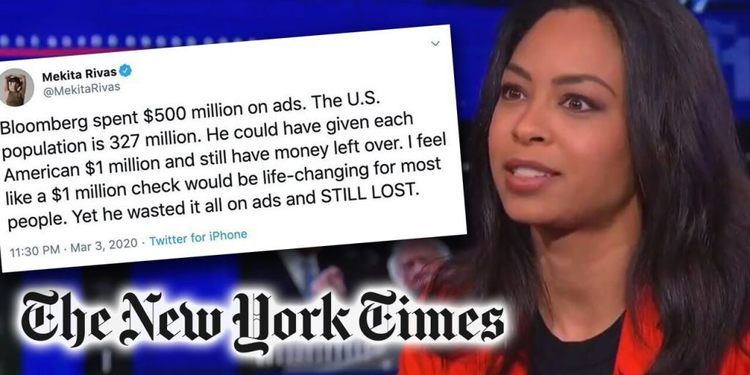 NYT Editorial Board Member Mara Gay: Because I am a Black Woman, It's Racist to Make Fun of My Innumeracy

I didn’t call attention to the big math mistake made on MSNBC because everybody is vulnerable to brain freezes. I’ve made plenty of math mistakes on iSteve over the decades, but when my gracious commenters point them out, I try to thank them and fix them.

My People Have Been Through Worse Than a Twitter Mob
When you’re a black woman in America with a public voice, a trivial math error can lead to a deluge of hate.

By Mara Gay
Mara Gay is a member of the [New York Times ] editorial board.

Late Thursday night, I appeared on TV. On Friday morning, I woke up to a text message from a friend.

“People on Twitter are pathetic,” she wrote. “How are you?”

On MSNBC’s “The 11th Hour With Brian Williams” the night before, we mentioned a tweet, written by someone else, about the enormous amount of money Michael Bloomberg had spent on his failed presidential run, about $500 million. Here’s what I said: “Somebody tweeted recently that actually with the money he spent, he could have given every American a million dollars.”

Nah, that would actually be 300+ trillion dollars, which would stretch even Mike Bloomberg.

* Nobody actually knows how many Americans there are, strikingly enough. You might think the government would keep a list …

The math, as a few people have pointed out, was wrong. Overnight, I had become an online sensation, and not in a good way. The video had gone viral, first shared by the right wing, and then by seemingly everyone else, too.

Some people seemed surprised I couldn’t fact-check arithmetic on live TV. Let me assure you that my high school math teachers were not among those people. …

… It didn’t help that I write for a newspaper where my colleagues are assiduously working to hold a rogue president accountable every day. We are living in a world where there is no grace for the smallest, most inconsequential mistake. …

I write a lot about the underdog, which tends to make some people feel threatened, or simply uncomfortable. When I appeared on that TV program last week, I had been working for many days interviewing black voters in the South who were determined to defeat Donald Trump, whom they see as the nightmare embodiment of the old hatreds many of them fought to overcome.

Many of those Americans had survived far worse under the racial terror of Jim Crow than anything I can imagine. I thought about the black man I met at the march across the Edmund Pettus Bridge in Selma, Ala., who had been beaten bloody by the police there half a century ago. I thought about the older black woman who approached me in a Selma coffee shop to tell me she was proud of me. I thought about my father, who grew up enduring the daily indignities of segregated South Carolina and Detroit.

I am here because of them. And there is nothing the haters can do about it.

The important lesson you must take away is that because of that black man who was beaten on the Edmund Pettus Bridge, my career as an editorialist must continue to flourish, onward and upward, no matter how much of a dumb bunny I am, personally.

You see, I am black, and that’s what matters in 2020: my career and my self-esteem. Emmett Till didn’t die for you, he died for me and my fabulous career. Me, not you: me.

I'm looking forward to the New York Times essay about how the Apollo 11 moon landing grew out of slavery. https://t.co/gfyB6tDsEZ

Who couldn’t trust the editorial judgment of Mara Gay on what really matters in American history? Clearly, she is an expert cliometrician.

Why Are Black People Still Punished for Their Hair? https://t.co/3yOVPejS7d

From the NYT opinion section in 2018:

Thanks, Meghan Markle, We Needed That
By Mara Gay
Ms. Gay is a member of the editorial board.

But in the end I couldn’t help but get swept away. …

Who knew the royal wedding was going to be so black? Who knew it would be so American? …

Suddenly, I thought about 11-year-old Tshego Lengolo, the British daughter of a South African immigrant, who sees Meghan Markle, and thinks of herself as a princess for the first time, too. “There is nothing that racist people can do about it,” she told The Times this month.

I thought of that photograph years ago of President Barack Obama with little Jacob Philadelphia, bowing down so this black child could know that the president’s hair was just like his own.

And then I began to cry.

Here was Meghan Markle, this beautiful bride, this self-described feminist. This divorced biracial woman, 36 years old, who had built her own career. This black princess.

Maybe I had avoided the spectacle because I was afraid for her, afraid for us, because I thought it might be too much to hope that others could fall in love with her, too.

But they did. And now this silly British wedding has this American tomboy thinking about dreams I put away when my country’s betrayal of us became clear. Now I’m imagining the day when we wake up and remember who we want to be.