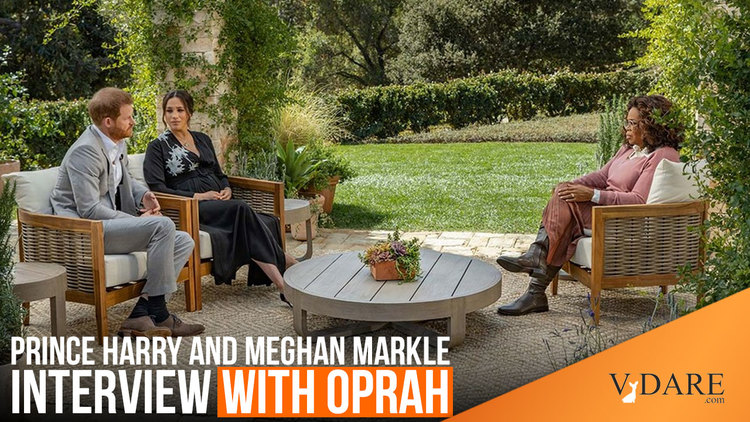 NYT: Prince Harry's Life Is Rooted In White Privilege (Not In, You Know, Prince Privilege)

At the New York Times’ “Critic’s Notebook,” go-to iSteve Content Generator Salamishah Tillet weighs in on how White Privilege is the defining feature of Prince Harry’s life (rather than, say, Prince Privilege):

Prince Harry Finally Takes On White Privilege: His Own

It was well worth the wait. The first joint interview with Prince Harry and Meghan Markle since they stepped down from royal life last year (a process that became officially permanent last month) did not disappoint.

I, for one, watched this tell-all with Oprah Winfrey while texting with many of the same Black women with whom I watched their wedding in 2018. Back then, we shared OMG emojis because we were pleasantly surprised by the way Black culture was so powerfully celebrated and Markle’s African-American identity so thoughtfully integrated into their ceremony at St. George’s Chapel.

Now, we were aghast at the couple’s allegations that racism toward Markle and its various consequences were a primary reason they fled their home to find freedom in sunny California.

… Rather, the second hour of the interview was a culmination of a process that Harry had been undergoing since their first date in 2016, when he was becoming more cleareyed, confrontational and emboldened to take on the British monarchy into which he was born, and the white privilege that holds it up and has benefited him his entire life.

… As Black parents, we try to prepare our children for these inevitable encounters with The Talk, the sage advice and survival strategies we hope might blunt the damage of these betrayals. But every Black person I know has had such a moment. Mine was my senior year in high school when my white classmates charged that the only reason I had been admitted to the University of Pennsylvania was because of affirmative action, an insinuation that equated being Black with being underqualified, and an injury that has caused me to obsessively overachieve in almost every aspect of my professional life.

Salamishah Tillet is a contributing critic at large for The New York Times where she has been writing since 2015. She covers popular culture, gender, sexuality, race and politics and is also the Henry Rutgers Professor of African American Studies and Creative Writing at Rutgers University, Newark. @salamishah