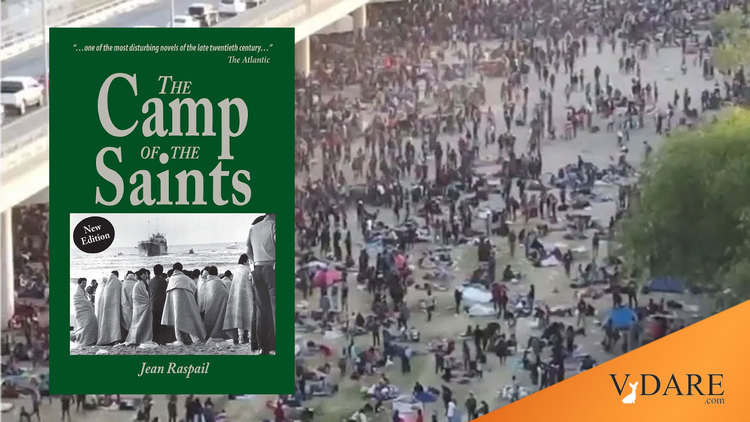 Four weeks ago in Taki’s Magazine, I cited the huge issue for the future of our country raised by the Establishment meltdown over a photo of a Border Patrolman on horseback responding to a Haitian immigrant:

The sudden crossing of the Rio Grande river at Del Rio, Texas, by 15,000 Haitians is a reminder that the most prophetic novel of the last half century was the late Jean Raspail’s 1973 book The Camp of the Saints about a million third-worlders landing on the beaches of France, and whites being unable to summon the will to be so racist as to turn them away.

Do American leaders still believe that they have the moral right to protect the territory of the American people by force? Or will we unilaterally disarm in the Scramble for America? …

And, worst of all, the Border Patrol was impeding migrants who are black. That makes them better than you.

From the New York Times news section today, confirming what I noticed then:

After Del Rio, Calls for Fairer Treatment of Black Migrants

The treatment of Haitians apprehended in Del Rio, Texas, has galvanized civil rights groups and others to press for change.

A Border Patrol agent chasing a Haitian migrant in Del Rio, Texas, in September. A recent report found that Black migrants face a higher rate of deportation than any other race. Credit…Paul Ratje/Agence France-Presse — Getty Images

WASHINGTON — Last fall, Joseph R. Biden Jr. made a stop in Miami’s Little Haiti neighborhood during his presidential campaign, pleading with residents to register to vote. “I’ll give you my word as a Biden, I’ll be there,” he told them. “I’ll stand with you.”

But as the Biden administration ignored pleas from advocates and some lawmakers not to deport thousands of Haitians back to their broken country last month after they arrived en masse in Del Rio, Texas, many Haitian Americans say the man they turned out for in last year’s election is nowhere to be found.

The White House responded with outrage to viral images of Border Patrol agents on horseback, corralling Black migrants in scenes that some compared to the treatment of fugitive slaves. Some also made connections to police violence against Black Americans. Mr. Biden said the agents would “pay” for their actions and awaited the results of a continuing investigation.

By the way, over half of Border Patrol agents are Hispanic. Biden’s mindless knee-jerk condemnation of BP agents doing their duty regarding black aliens isn’t going to help him among traditionally Democratic Rio Grande Valley Hispanic-Americans, who already surged toward Trump last year, after a year in which Democrats decided that blacks are Black and Latinos are Latinx.

… But what happened in Del Rio is not just about the horses, immigration and civil rights advocates said. It is about the poor treatment of Black migrants that has spanned administrations, often overshadowed by the larger debate about the broken immigration system and a persistent focus on waves of migrants from Central America.

Recent reports have found that Black migrants are more often placed in solitary confinement in immigration detention, face a higher rate of deportation than any other race and see higher bonds set by immigration judges.

… Regardless, the images of agents on horseback drew such a visceral reaction not just from immigration advocates, but also from Black Americans and powerful civil rights organizations like the N.A.A.C.P., that many see this as a moment to effect change.

“The connections have been made for Black people,” said Judith Browne Dianis, the executive director of the Advancement Project, a civil rights organization. “And accountability requires that the Biden administration act, because all Black people saw it, and we can’t unsee it.”

The issue could become a political liability for Democrats going into the 2022 midterm elections, said Adrianne Shropshire, the executive director of BlackPAC, a political organizing group. Black voter turnout in 2022, she said, will be critical for the Democrats to hold onto their majorities in the House and the Senate.

“It would be a mistake to think that Black Americans are somehow not paying attention to immigration issues,” Ms. Shropshire said, “particularly because the images that we saw are so jarring.”

… The overwhelming majority of deportation flights went to Haiti, with others going to Cameroon, the Dominican Republic, Ecuador, Guatemala, Liberia, Mexico, Rwanda and Senegal, according to an administration official who was not authorized to speak publicly.

Democrats in Congress have also pushed the administration to temporarily stop deporting Cameroonians, citing armed conflicts in the country. The Trump administration was accused of mistreating people from the central African nation. …

Senators on the Foreign Relations Committee recently sent a letter to the secretaries of state and homeland security to express “outrage and disappointment over the cruel treatment of Haitians at our border, and their summary deportations.” …

And finally, the NYT reporters explain a few Off-Narrative facts:

Although it was unusual for such a large group of migrants to cross the border illegally at once, what happened in Del Rio is most likely just the tip of the iceberg. Currently, tens of thousands of migrants — including many Haitians — are crossing a dangerous and roadless jungle that connects South America to the north, fleeing economic hardship caused by the pandemic.

As I summed up last month:

… as I’ve been pointing out for many years, the most obvious massive threat in the foreseeable future is that the population of sub-Saharan Africa is exploding at a time when the will to defend the territories of the white world is cratering. …

Wokeism is simply the ideological rationalization of white dispossession.