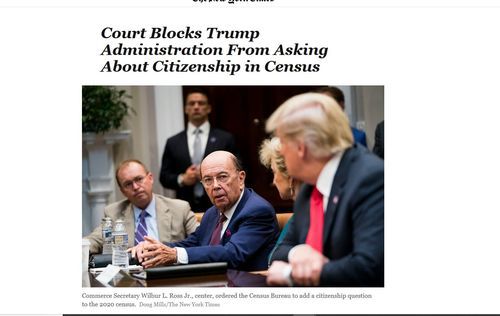 Obama Appointed Kritarch “Blocks” Trump Administration From Asking About Citizenship On 2020 Census, But Supremes Will Get To Weigh In

An Obama appointee on the bench has “blocked” the Census Bureau from asking if the residents of the US are citizens or not.

In a lengthy and stinging ruling, Judge Jesse M. Furman [appointed by Obama] of the United States District Court in Manhattan said that Wilbur L. Ross Jr., the commerce secretary, committed “a veritable smorgasbord” of violations of federal procedural law when he ordered the citizenship question added.

Mr. Ross “failed to consider several important aspects of the problem; alternately ignored, cherry-picked, or badly misconstrued the evidence in the record before him; acted irrationally both in light of that evidence and his own stated decisional criteria; and failed to justify significant departures from past policies and practices,” Judge Furman wrote.

But while Mr. Ross’s violations were “egregious,” he said, there was not sufficient evidence to prove, as plaintiffs in the lawsuit had claimed, that he had deliberately sought to discriminate against noncitizens and minorities that were most likely to be affected by the citizenship question. In part, he said, that was because the Supreme Court had blocked the plaintiffs from taking sworn testimony from Mr. Ross about his actions.[More]

This is horrifyingly stupid of this judge to do this, and it’s a major scandal that Census Bureau didn’t ask this in the last three censuses.

Here is our previous coverage of that:

That's also about Judge Furman's suspicion that the Trump Administration is trying to protect America for the wrong reasons. More below:

In 2010, one of the words you could select on the Census Form to describe your race was still “Negro”, despite the fact that this had been out of date for over 40 years. In The American people: the findings of the 1970 census, (1974) New Yorker writer E.J. Kahn, Jr  wrote

In an unbiased sort of way, the Census Bureau is one of the most race-conscious institutions functioning in the country. Nearly all its findings are uncompromisingly broken down in terms of black and white. (It is one of the nation's biggest remaining users of the word "Negro," to which its computers have become stubbornly accustomed.)

But as we said in 2010, there's nothing wrong with putting the word "American" on the Census form.