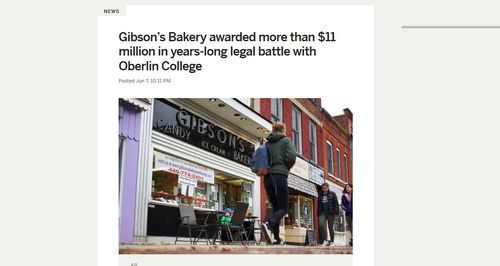 For some reason, Social Justice Jihadis obsess over baked goods. Oberlin College set its student-goons on the warpath against a neighborhood bakery, but now is paying the price. From the Miami (OH) Herald in 2017:

… The dispute, which began in November 2016 with the arrest of three black Oberlin students who tried stealing wine from Gibson’s [Bakery], is now a lawsuit in which the exasperated bakery owners accuse the college and a top dean of slandering Gibson’s as a “racist establishment” and taking steps to destroy the family’s livelihood. …

The three students were arrested after punching and kicking the white shopkeeper. The 18- and 19-year-old students said that they were racially profiled and that their only crime was trying to buy alcohol with fake identification; the shopkeeper, Allyn Gibson, said the students attacked him after he caught them trying to steal bottles of wine. …

On Nov. 7, the Gibsons sued Oberlin and Meredith Raimondo [right], vice president and dean of students, for slander, accusing faculty members of encouraging demonstrations against the bakery by suspending classes, distributing flyers, and supplying protesters with free food and drink.

It says Raimondo took part in the demonstration against Gibson’s with a bullhorn and distributed a flyer that said the bakery is a “RACIST establishment with a LONG ACCOUNT of RACIAL PROFILING and DISCRIMINATION.”

ELYRIA, Ohio — Gibson’s Bakery won more than $11 million from Oberlin College Friday in a lawsuit stemming from protests outside the College Street business in November 2016. …

The students pleaded guilty to a misdemeanor in August 2017, reading statements into the record that Gibson was within his rights to detain the robber and that the conflict was not racially motivated