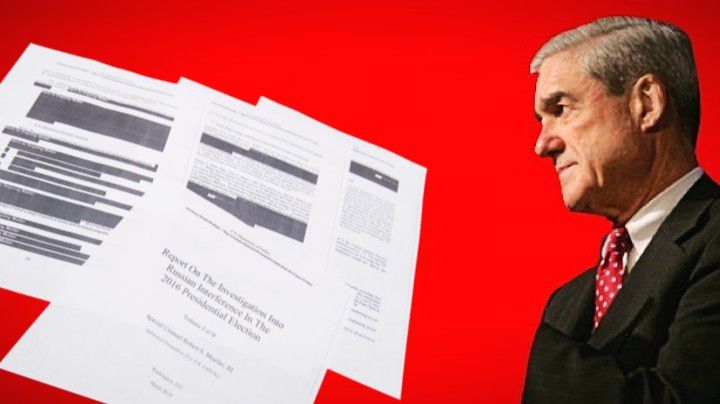 OF COURSE Last Week's Mueller-fest Was A Damp Squib: The Election Wasn't "Hacked" In Any Way

See, earlier by Patrick J. Buchanan: After Mueller Debacle, Where Do Democrats Go?

Unfortunately, that monkeywrenching has been all too effective.

Also unfortunately—since this made the monkeywrenching effective—a large fraction of our fellow citizens lack that modest grasp (just as they lack it with respect to immigration).

What would it take to educate them?  Well, if they'd listened to Rush Limbaugh's radio show last Thursday, July 25, they would have been exposed to an essential fact that had been authoritatively and publicly enunciated before the 2016 election.  They would also have learned that it had been effectively on the record as of July 13, 2018 that the Mueller "investigation" was a snipe hunt, with the inattentive American public being the targeted dupes.

The full transcript for that part of last Thursday's show is at this link.  And here are the key excerpts taken from it, with highlights boldfaced and some remarks inserted by me:

RUSH: I want to take you back. I’ve shared this bite with you before you, but I’m gonna do it again. Let me take you back July 13, 2018, Washington, the Department of Justice. The attorney general, Rod Rosenstein, is announcing indictments. These are the indictments of the Russian troll farm that Mueller was so proud of. Thirteen Russian troll farms were indicted. Mueller went through all kinds of rigmarole to describe everything they had done. They had tampered here; they had tampered there.  [Rosenstein was actually Deputy Attorney General, and Mueller reported to him because then-Attorney General Jeff Sessions had recused himself from the "Russia" investigation.  Rosenstein resigned a few months ago.]

The truth of the matter of these troll farms is they bought Facebook ads, and over half of the money they spent was after the election. There still is no proof that these troll farms are officially tied to the Russian government. This Russian troll farm operation is no different than any domestic troll farm operation. They were trying to run targeted advertising. But Mueller needed Russians. There weren’t any Russians in the story! One year ago, there weren’t any Russians in this whole Russian collusion story, so they had to indict some people.

So they indicted some people that everybody knew could never come and face charges, because Russia would never release them. They would never be extradited. So what better thing than to indict a bunch of Russians that you can tell anybody you want anything about ’em, and they can never respond to their day in court ’cause they’re never gonna show up — and that’s what happened. [To the Mueller cabal's embarrassment, one of the indicted parties actually did show up, demanding their day in court, discovery, etc.!  See below.]  But what did happen that nobody remembers and nobody reminds you of is what Rod Rosenstein said after having announced the indictments in three… two… one…

[The ~12-minute video of Rosenstein's press conference is here: The crucial part that Limbaugh quotes starts at 4:35 and runs for 12 seconds. ]

RUSH: Wait a minute. Wait a minute! What is this? We’re indicting 13 Russian troll farms for interfering in the election. There’s no evidence. “There’s no allegation in the indictment that anything they did changed a single vote or altered any election.” Rosenstein said it. The Drive-By Media totally ignored it. It was never to be heard from again except on this program those times I have aired it.

Now, I want to go back to this, because this is key and fundamental. The one indictment of any Russians, 13 Russian troll farms. I have a little bit more time, I’m gonna explain to you. These troll farms were people that were buying Facebook ads. And they were supposedly targeting Facebook users like everybody else does. There is no evidence they are tied to the Russian government.

One of the people running one of the troll farms happens to know Putin. And so in our convoluted alternative reality, created by the delusional Left today, that equals the Russian government.

Here’s the truth of this. This Russian troll farm operation that Mueller indicted on July 18th last year bought $100,000 of “Fakebook” ads, $100,000. [In other words, $0.1 million.  Whoop de doo—compare that to the $940 million spent on the fall presidential campaign by the two principal candidates and their supporting outside groups.] Here is the kicker. Half of the ads were bought after Trump won the presidency and half of the ads were aimed at Trump. Half of the ads were pro-Hillary. In other words, these Russian troll farm indictments were nothing but public relations indictments.

[I think it's preposterous that we'd be indicting any Russians (operating in Russia) in the first place.  (a) They're not subject to our laws; (b) Countries in general, including us, routinely muck around in other countries' elections ... or at least try to.]

It’s no different than indicting Putin! Putin’s not gonna show up and be deposed and testify. Except one of the troll farms did. One of the troll farms actually hired an American lawyer and showed up and demanded the opportunity to prove their innocence. And Mueller’s team was bumbling and stumbling around telling the judge, “No, no, no, Judge, we can’t do this yet because they’re still doing it.” Remember this?

Mueller’s team refused to meet these people in court and asked the judge for an indefinite delay of the case on the basis that the troll farms were still troll farming. “No, Judge, we can’t do it, they’re still doing it, no way we can finalize our preparation.” This was nothing but a stunt! It was nothing but a stunt. And it was the only time the Russians were ever officially linked in this collusion story that the Russians tampered and meddled in the election.

Nobody in the Drive-By Media ever goes back to this and recites this or replays this. [i.e. Rosenstein's blase statement, seen in the video above, that no Americans were being indicted for election crimes and that no votes were affected] But how can this be? In the indictment of the Russian troll farms there’s no allegation, no accusation in the indictment that these guys changed a vote or altered the result of any election.

Well, what the hell are we here for? ‘Cause I’m gonna tell you something, folks. At the time that this happened there was polling data out there that showed 42% of the American people believed the Russians had tampered with voting machines.  After a year and a half of four times a day in the New York Times and the Washington Post and CNN, Russians colluded, Trump colluded, meddled in the election, what did that mean to people?

And they succeeded with 42% of the American people. And yet no allegation whatsoever, ever! There has yet to be an allegation in court, in an indictment, the Russians did anything! That tampered with a voting machine or machines or affected the outcome of an election. What is this all about? If that doesn’t end this, if that doesn’t put a nail in this coffin, there’s nothing that can.

We are all being strung along on a totally made-up, delusional lie that the Russians meddled in the election.

OBAMA: There is no serious person out there who would suggest somehow that you could even, you could even rig America’s elections, in part because they’re so decentralized and the numbers of votes involved. There’s no evidence that that has happened in the past or that there are instances in which that will happen this time.

[See Obama say that here. During the first two minutes, he riffs a mixture of facts and absurdities; starting at about 2:00, you'll see him say what's quoted just above.]

RUSH: October 18th, just two weeks, three weeks, before the election, Obama is pooh-poohing the whole idea that Russia could affect the outcome of the presidential election. He’d gotten sick and tired of hitting the question. He’s also sick and tired of the allegation he hadn’t done anything to stop it.

Remember this thing had been floating around for months. And the Hillary campaign’s getting ready, got it in reserve in case she loses, this is where they’re gonna go. Then Obama says that. Now, folks, you put these two things together, and what do you have? You have Rosenstein saying in the only indictment of Russians in this whole sordid mess no votes were changed, the outcome of no election was affected, and Barack Obama had said that it’s not possible to do anyway.

So what have these two and a half years been? What the hell have we been through, and why? Because everybody, the media, everybody knows that everything they have been saying is B.S. It is totally fake. It’s totally made up. There was never any collusion. The Russians could not have changed the outcome of the presidential election. There was no evidence they did.

Circus impresario P.T. Barnum is reputed to have said "There's a sucker born every minute."  And legend has it that a Barnum assistant responded, "But where do the rest of them come from?"  Well, 42% of, say, 250 million American adults amounts to 105 million people, so suckers are an abundant resource in this country.

Then as Townhall.com commenter Derek Hunter mused following Mueller's damp-squib testimony, while noting that the impeachment peddlers still hadn't been budged from their course:

The drooling and incoherence will continue, as will the digging. Democrats know they’re drilling a dry well, but as long as they’re still drilling they can keep those on the hook from realizing they’re being hoodwinked.