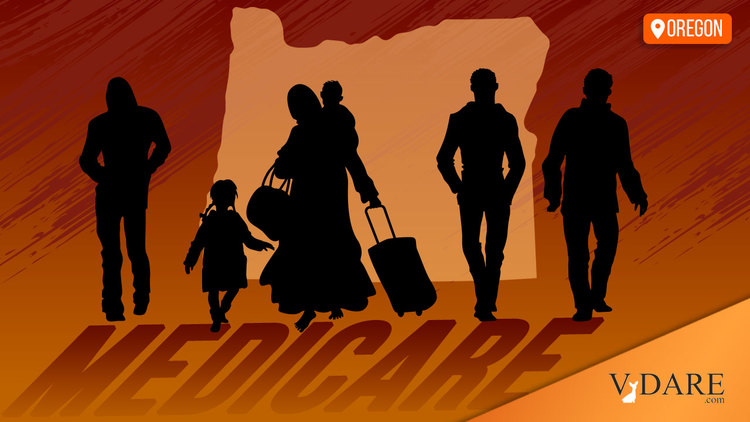 One Reason For "Greater Idaho": Portland, Oregon Wants To Give Medicaid To Illegals

There is a reason the “Greater Idaho”—secession of conservative counties in eastern Oregon to become part of Idaho—movement is growing in the hearts and minds of rural whites across the state of Oregon.

Boiled down, it’s about the incompatibility of those white people living in Portland and those who watch in horror across the state of Oregon who dare notice the type of community and city those whites residing in Portland uniquely create.

The Radical-left Governor of Oregon, Kate Brown, is expected to sign the bill into law this week. She has been a flagrant supporter of the use of taxpayer funds to people who are here illegally. Her office has been pressuring the Oregon Legislature to pass the “cover all people” proposal since March.

Gov. Brown: “Everyone deserves access to health care. It’s the right thing to do, the just thing to do. And, it’s smart economic policy.”

According to the most recent data from Pew Research Center, there are 110,000 illegal aliens living in Oregon. Usually, the Federal Government pays most of the costs associated with Medicaid, but non-citizens are ineligible for federal funding. This means that Oregon taxpayers will have to foot the entire bill. The estimate to cover an additional 50,000 people on Medicaid, less than half of the state’s population of illegals, would be over $300M.

From Lund Report: “Typically, Medicaid costs taxpayers about $6,000 per covered person per year. So, covering 50,000 would cost about $300 million a year.”

This continues the organized effort by socialist-dems across the country to give out free money and benefits to illegals who can make it across the border. Biden will even put them up in a hotel and send them to the American city of their choice. It’s no wonder hundreds of thousands of people are pouring across the border every month.

It’s the only way these Marxists can stay in power. They aren’t giving these people free money and healthcare for nothing. They are buying their vote while destroying the country at the same time.

Conversative Oregonians have been locked in their homes for more than a year to try and stop the spread of Covid-19, and as they emerge into the Brave New World Democrats are working to create in Oregon, they see illegal immigrant's health prioritized above their own families.

And their tax dollars will fund the initiative.

Stories like this are why more and more counties in Oregon and across the nation will seek secession from states dominated by one extreme left-leaning metropolitan center.

Let those white people who cherish diversity as the highest moral good live with the consequences of their policies and beliefs.