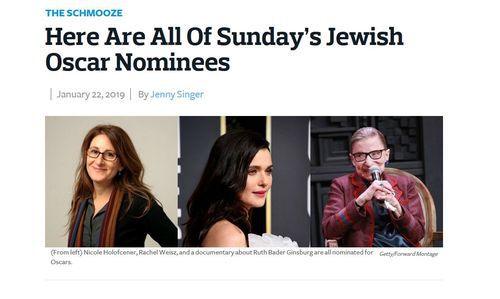 Oscar Sunday In The FORWARD: "Here Are All Of Sunday’s Jewish Oscar Nominees"

Here Are All Of Sunday’s Jewish Oscar Nominees
January 22, 2019 By Jenny Singer

On the bright side …

Rachel Weisz is, as usual, very good as Mrs. Churchill in The Favourite, although Emma Stone and Olivia Colman as Queen Anne might be even better.

Justin Hurwitz’s score for First Man is fine, but Moon movie scores have to compete against the two Strausses of 2001. The only outer space movie to top 2001 in scoring was von Trier’s Melancholia, which used Wagner’s epochal prelude to Tristan und Isolde.

Cold War has a really nifty trailer (much better cinematography than “Roma”) but I haven’t seen the movie. The Polish director is part Jewish.

The Coen Brothers are nominated for Best Adaptation, even though 4/6ths of Buster Scruggs is original. But the 2 best sequences are adapted from Jack London and another old time novelist, Stewart Edward White. White’s grand wagon train story is adapted almost word for word from that forgotten writer of Westerns, but that’s what the real talents do: they know when the original doesn’t need much of their help. For example, John Huston’s first draft of The Maltese Falcon just consisted of him crossing out parts of the Hammett novel and then having his secretary type up the rest.

I haven’t seen A Star Is Born or Green Book, but I probably remember more lucidly Buster Scruggs than any of the six Best Picture nominees I’ve seen. The idea that, after 34 years and 18 movies, the Coens are simply the best filmmakers of our era is unexciting, but I can live with it.

BlacKkKlansman was all-around terrible, except for Adam Driver, who isn’t Jewish, and, to a lesser extent, Topher Grace, who isn’t Jewish either. The Jewish screenwriters’ contribution to the movie is dismal. In comparison to BlackKkKlansman’s incompetence, Black Panther is the second coming of The Maltese Falcon.

But the concocted Jewish subplot of BlacKkKlansman might get Spike Lee his first Best Director Oscar 28 years after he was widely accused of anti-Semitism for the Flatbush brothers in Mo’ Better Blues.

Deep down, Spike hates interracial marriage, especially black men marrying Jewish women. I believe, although I could be wrong, that Spike’s stepmother, Susan Kaufman, is Jewish. Spike’s beloved mother died of cancer when Spike was 17. Like many semi-orphans, Spike felt that his widower father, a jazz musician, should live monastically for the rest of his life. (Children naturally worry that their widowed parents’ remarriage will endanger their inheritance. Spike comes from an affluent family—his grandmother gave him $25,000 in the mid-1980s to make his first movie.) But Bill Lee, still alive today in his 90s, thought his son’s feelings were unreasonable.

“Can You Ever Forgive Me” was too homosexual-cultish for my taste, although Richard E. Grant, who isn’t Jewish, was wonderful.

Vice features superb acting by Christian Bale, Amy Adams, and Sam Rockwell, but Adam McKay’s writing and directing is horrible. Nobody Jewish can take either the credit or blame for Vice.

Bohemian Rhapsody is adequately good. Director Bryan Singer got #MeTooed partway through. But the movie really belongs to Rami Malek, a Coptic Christian from my old high school, as Parsi singer Freddie Mercury, and doctor of astrophysics Dr. Brian May, Queen’s guitarist, for insisting upon a reasonably realistic telling of the tale.

The Death of Stalin didn’t get any Oscar nominations, although Jason Isaacs as Marshall Zhukov as a hearty Yorkshireman was a blast.