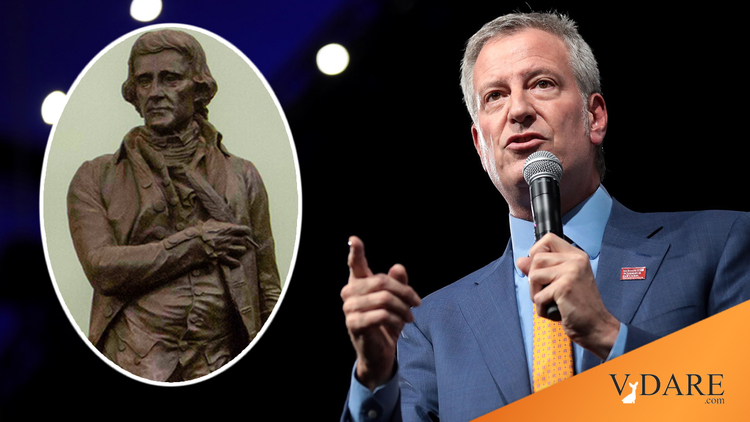 Our Anti-White Arrows Will Blot Out The Sun Of Your Past: NYC Council’s Black, Latino And Asian Caucus Pushes To Remove 200-Year-Old Thomas Jefferson Statue

To paraphrase Xerxes from 300:

Why, uttering the very name of Washington or Jefferson or other Dead White Males will be punishable by death! The world will never know you existed at all!”

Mayor de Blasio said Thursday he expects a statue of Thomas Jefferson will get the heave-ho from City Hall after a design commission he appointed reviews a request to remove it next week.

If approved, the request, which originated with City Council Speaker Corey Johnson and the Council’s Black, Latino and Asian Caucus, would result in the statue of the Founding Father being moved out of the City Council chamber and housed indefinitely at the New York Historical Society

The statue has stood in City Hall for nearly 200 years, but is coming up for review by de Blasio’s Public Design Commission because of Jefferson’s history as a slave owner.

The commission is expected to review the matter on Monday.

“I start with the assumption that it will be approved, but I don’t know. That’s ultimately a decision that that commission makes,” he said. “The City Council spoke out of their belief of what is right for their chamber, for their side of City Hall, and that to me is just a straightforward matter. If that’s what they feel, I want to respect them as another branch of government.”

De Blasio, whose term ends in December, suggested that while he appointed the 11-member design commission, they would act independently of him and exercise their own judgment. He also was quick to point out that the request to remove it didn’t originate with him or his wife First Lady Chirlane McCray, who he appointed to review the fate of the Jefferson statue and others last year.

“It came from the Council, not me or the First Lady,” de Blasio said.

The statue’s removal from City Hall is listed as a so-called consent item on the design commission’s agenda, meaning the 11-member panel of architecture and museum notables will vote up or down after reviewing public comments submitted virtually.

The push to remove statues of historic figures is not without its detractors, though.

“It stinks,” said Councilman Joe Borelli (R-Staten Island). “It’s like de Blasio is leaving a gallon of milk outside the fridge at Gracie Mansion and won’t be there to smell the results.”

This will only go on as long as we allow it too.