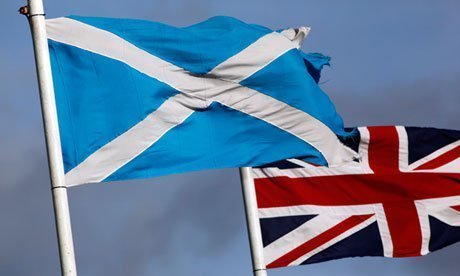 Patriotic Prejudice And Scottish Nationalism: Do The ENGLISH Have A Vote On Independence?

John Derbyshire wrote this in 2000

Forty years ago the English comic-song duo of Michael Flanders and Donald Swann produced their "Song of Patriotic Prejudice," a sort of spoof English — as opposed to British — national anthem. After an introductory verse to set the theme ("The rottenest bits of these islands of ours / We've left in the hands of three unfriendly powers …") there followed a verse each abusing the Welsh, Irish and Scots, in terms that would nowadays get you prosecuted for Hate Speech:

He cheats when he can —

And little and dark,

The full lyrics are here, another version is here. Flanders and Swann sing

The rottenest bits of these islands of ours

We've left in the hands of three unfriendly powers

Examine the Irishman, Welshman or Scot

You'll find he's a stinker, as likely as not.

The Scotsman is mean, as we're all well aware

And bony and blotchy and covered with hair

He eats salty porridge, he works all the day

And he hasn't got bishops to show him the way!

Of course, as Derbyshire later wrote, in 2007, "I believe that in the U.K., making fun of foreigners is actually criminal, if done as part of a public performance."[When Foreigners Were Funny NR, August 29, 2007]

However, let's make a serious point—it hasn't been all jam for the English to have Welshmen and Scots as part of their polity, especially since England became more democratic, and all those Welshmen and Scots could (a) vote and (b) get elected to Parliament.

In a column about the possibility of America allowing immigrants to run for President, I mentioned that

Most countries don't forbid immigrants from running for Chief Executive. Canada, for example, started its independence in the nineteenth century with a Prime Minister who had been born in Scotland. Great Britain had a Canadian Prime Mister during in the 1920's. England has also suffered badly from Scotch and Welsh Prime ministers, the Welsh Lloyd George having two chapters to himself in The Penguin Book Of Lies.

There will certainly be consequences for Ed Miliband. If Scotland separates from the rest of the UK, the prospect of Labour ever winning a majority at Westminster again will be severely damaged. They currently hold 40 of the 59 Scottish seats at Westminster, without which some reckon a near permanent Tory majority would result. [Scottish independence: whichever way the vote goes, Britain will be changed for ever, September 13, 2014]

Does that mean that the economic and political horrors of post-war, pre-Thatcher, Labor-controlled Britain were caused by Scotland?

If so, assuming the Scots vote to stay in Britain the English should have referendum of their own—to expel them.