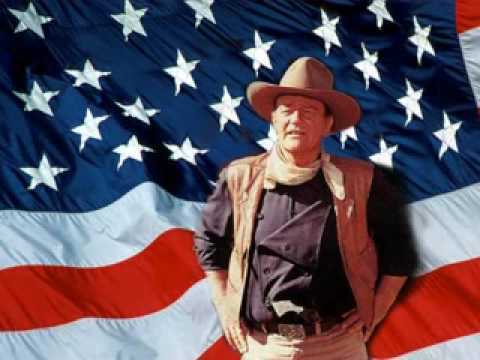 The latest attack John Wayne for racism is not because in The Searchers, he was mean to the Indians who had raped and murdered the woman he loved (as well as, previously, his own mother), or because in The Man Who Shot Liberty Valance, he was paternalistic to Woody Strode, who played his manservant.

Nor is because he was mean to the atrocity-committing Japanese soldiers in The Sands Of Iwo Jima.

No, it's because of a few paragraphs from a 1971 Playboy interview:

Playboy: "Angela Davis claims that those who would revoke her teaching credentials on ideological grounds are actually discriminating against her because she's Black. Do you think there's any truth in that?"

Wayne: "With a lot of Blacks, there's quite a bit of resentment along with their dissent, and possibly rightfully so. But we can't all of a sudden get down on our knees and turn everything over to the leadership of the Blacks. I believe in white supremacy until the Blacks are educated to a point of responsibility. I don't believe in giving authority and positions of leadership and judgment to irresponsible people."

Playboy: "Are you equipped to judge which Blacks are irresponsible and which of their leaders inexperienced?"

Wayne: "It's not my judgment. The academic community has developed certain tests that determine whether the Blacks are sufficiently equipped scholastically. But some Blacks have tried to force the issue and enter college when they haven't passed the tests and don't have the requisite background."

All of this is true, assuming by "white supremacy" you don't mean 1950s Mississippi but say, white majority, white ruled America—in which every President until 2008 was white.

The Attack on John Wayne Is an Attack on White America

Editor’s Note: American Renaissance first published this column by Paul Kersey in February of 2019. This weekend, the push to rename John Wayne Airport has been renewed, and in light of recent events, is likely to succeed—making this essay more valuable than ever.

In 1980, Orange County, California boasted a population that was 78 percent white. It was the birthplace of the American conservative movement, boasting 38 chapters of the anti-communist John Birch Society.

John Wayne — star of perhaps the finest movie ever made, The Searchers — was a member of this organization and lived in neighboring Newport Beach. In 1979, the same year he died at age 72, the airport in Orange County was renamed John Wayne Airport. A nine-foot statue of Wayne in cowboy garb stands in the lobby of the main terminal.

The Resolution of the Orange County Board of Supervisors proclaiming the name change says he was a “man of humility, of honesty, and a hero of the American West (who) was a symbol to the world of the traditional American values.”

If ever an actor epitomized the concept of Manifest Destiny, it was Wayne. He fought for 14 years to have the film The Alamo made — a movie he directed, produced, and starred in as Davy Crockett. Donald Clark writes in John Wayne’s The Alamo: The Making of the Epic Film that the movie was Wayne’s idea of “how being an American should be illustrated.” To Wayne, the Alamo was the archetypal American story, and the actor said the film should “remind the freedom-loving people of the world that, not too long ago, there were men and women who had the guts to stand up for the things they believed in, to the point of death.”

Yet Wayne’s conception of American identity is being buried by demographic change. In 1970, Orange County was 86 percent white. By 2004, the massive growth in non-white population (mostly Asians and Hispanics) pushed whites to just 49 percent of population. This demographic transformation ensured Democrats won all seven congressional house seats in 2018 election, a stinging reminder that demography is destiny even in the land of John Wayne.

Not surprisingly, the new population inhabiting the area has no love for a figure associated with the conquest of the West and traditional American identity. In 2016, a push by white Republicans to have a day celebrating the birthday of John Wayne was overwhelmingly voted down because of Wayne’s “racism.” A resolution in the State Assembly failed by 36-19 votes, with opponents Assemblyman Luis Alejo and Assemblywoman Lorena Gonzalez citing a 1971 Playboy interview in which Wayne gave his views on race. [Read the whole thing]