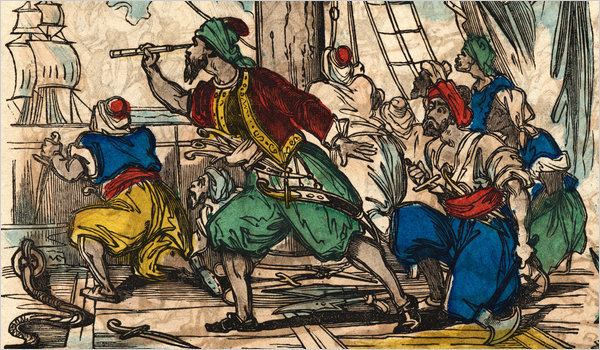 Readers of the wonderful Patrick O'Brian Aubrey/Maturin novels know that pirates from the North African coast were a terrible scourge not only to Mediterranean sea commerce, but also to fishermen and coastal communities as far away as the west coast of Ireland, for several hundred years until the 19th Century, on account of their appetite for slaves.

Now a new book, Christian Slaves, Muslim Masters: White Slavery in the Mediterranean, the Barbary Coast, and Italy, 1500-1800, has tried to quantify these depredations. The Guardian reports:

North African pirates abducted and enslaved more than 1 million Europeans between 1530 and 1780 in a series of raids which depopulated coastal towns from Sicily to Cornwall, according to new research…. American historian Robert Davis has calculated that the total number captured - although small compared with the 12 million Africans shipped to the Americas in later years - was far higher than previously recognized.

Villages and towns on the coast of Italy, Spain, Portugal and France were hardest hit but the raiders also seized people in Britain, Ireland and Iceland… Almost all the inhabitants of the village of Baltimore, in Ireland, were captured in 1631, and there were other raids in Devon and Cornwall.

Given the population of Europe in this era, one might have to multiply by 15 to grasp the current significance.

In comments which may stoke controversy, [Davis] said that white slavery had been minimised or ignored because academics preferred to treat Europeans as evil colonialists rather than as victims

Of course, further documentation that slavery was not particularly a European foible is valuable.

But from a VDARE.COM perspective, the more significant point is why the size of this problem registered so little amongst the political elites of the time.

It was because the burden fell on the blue collar workers in unfashionable occupations and remote locations.