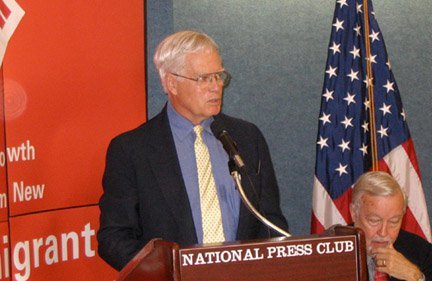 WASHINGTON - Three decades ago, a middle-aged doctor sat outside his northern Michigan home and saw a patch of endangered paradise.

A beekeeper and amateur naturalist of prodigious energy, John Tanton had spent two decades planting trees, cleaning creeks and suing developers, but population growth put ever more pressure on the land. Though fertility rates had fallen, he saw a new threat emerging: soaring rates of immigration.

Time and again, Dr. Tanton urged liberal colleagues in groups like Planned Parenthood and the Sierra Club to seek immigration restraints, only to meet blank looks and awkward silences.

"I finally concluded that if anything was going to happen, I would have to do it myself," he said.

Improbably, he did. From the resort town of Petoskey, Mich., Dr. Tanton helped start all three major national groups fighting to reduce immigration, legal and illegal, and molded one of the most powerful grass-roots forces in politics. The immigration-control movement surged to new influence in last fall's elections and now holds near veto power over efforts to legalize any of the 11 million illegal immigrants in the United States.

A third organization, the Center for Immigration Studies, joined the others in December in defeating the Dream Act, which sought to legalize some people brought to the United States illegally as children.

Rarely has one person done so much to structure a major cause, or done it so far from the public eye. Dr. Tanton has raised millions of dollars, groomed prot?©g?©s and bequeathed institutions, all while running an ophthalmology practice nearly 800 miles from Capitol Hill.

"He is the most influential unknown man in America," said Linda Chavez, a former aide to President Ronald Reagan who once led a Tanton group that promoted English-only laws.

After this promising opening, you might expect the article to move on to using Tanton's fascinating experience as a modern day Jefferson Smith as the lens through which to examine one of the bizarre developments of the last quarter century: the emasculation of the environmental movement by pro-immigrationist interests. For example, you might expect the NYT to cite the brand new Census data to show that Tanton's fears are coming true and then ask: Why have groups like the Sierra Club dropped their traditional insistence on immigration restriction, despite the huge impact immigration-driven population growth has had on, say, America's (and thus the world's) carbon emissions? [Answer here at VDARE, not in NYT for some reason.]

Well, you might expect that if you'd been living on Mars for the last few decades. Instead, the article immediately turns into the usual exercise in point-and-sputter guilt by association:

While Dr. Tanton's influence has been extraordinary, so has his evolution - from apostle of centrist restraint to ally of angry populists and a man who increasingly saw immigration through a racial lens.

Really, doesn't the childishness of contemporary thinking just wear you down? Junior high school girls engage in more principled thinking than the Who? Whom? that is the standard assumption of the conventional wisdom on immigration.