Julia Ioffe in Politico has a long article about Donald Trump’s immigration idea man and warm-up act Stephen Miller. She intends to insinuate that the young staffer is some kind of Goebbels / Father Coughlin / Huey Long enemy.

But Miller also cuts a deeply unsettling figure, even to many in his own party. His nine-year career working for some of the most politically fringe figures on the Hill—he also worked for Michele Bachmann and helped David Brat in his primary defeat of Eric Cantor—was preceded by a trail of writings and provocations that go all the way back to high school, one that has raised the eyebrows of even conservative Republicans. 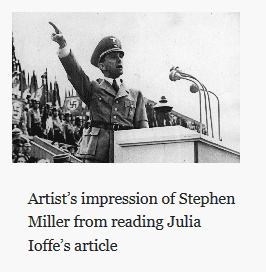 There is something eerily vintage about Miller’s stump speeches. The combination of their substance—vilifying immigrants as killers, the promise of nativist glory days ahead—and their delivery with a calm face around a loud, droning mouth, slicked-back hair and sharp suit, floridly invoking powerful cabals against the people: All of it harks back to an earlier time. It’s as if the video should be in black and white, and the microphone in front of Miller an antique, metallic affair. …

“All the anger right underneath the surface just waiting to come through, about what I don’t know,” says a former staffer with the Republican leadership on the Hill. “I’ve seen the videos of him getting the crowd fired up. People that knew him when he was on the Hill, I don’t know how to describe the reactions people had to the videos of him. Maybe creeped out a little bit? Like, what’s going to happen when this guy gets the power?” He pauses as a thought dawns on him. “Oh my God,” he says. “He’s going to find out that I spoke with you and I’m going to end up in a camp somewhere.”

One problem is that she has to quote Miller a lot to fill out her space, and he’s awfully reasonable and she can’t think of much except to point ‘n’ sputter:

Miller studied political science, but the apogee of his college career was not academic. It was a PR coup: his public defense, in the pages of the Duke Chronicle and on national television, of the Duke lacrosse players accused of rape by a black stripper. He penned several columns in their defense under titles like “Prejudice,” “Persecution,” and “Crawl to Justice.” He alleged there was indeed a racial motivation for the case: that of the radical left in going after white lacrosse players. “Being a white, male lacrosse player was all it took,” he wrote in one column. In another, titled “Racial Hypocrisy,” he wrote, “But when a black man was recently accused of raping a white Duke student at a party hosted by members of a black Duke fraternity, suddenly these great defenders of virtue fell silent.” He went on the O’Reilly Factor and the Nancy Grace Show to defend the lacrosse players, wearing a suit, a smirk, and a gold pinky ring. Even then, he was already a polished, florid speaker.

The Duke lacrosse players were vindicated, and to this day Miller is still bursting with pride. “The thing that I’m proudest of is that I spoke out early and often on behalf of American legal principles in the Duke lacrosse case when it was not popular,” he told me. “I take great pride that, under enormous social and political pressure, I remained steadfast in my support for due process.”

Another problem for Ioffe is that Miller is Jewish:

“I’M IN HEAVEN!” Ann Coulter tweeted when it was announced in late January that Trump had hired Miller, whom Coulter called “Sessions’ brain trust.” The hire, Coulter felt, offered a sign that Trump was “not backing down on immigration.”

How did Stephen Miller come to occupy such an extreme position on immigration? Strangely, it was his experience coming of age in a liberal Jewish family in liberal Santa Monica, the Berkeley of Southern California. “I think it was growing up in California, he saw the role that mass migration played turning a red state blue,” says one former Senate colleague. “He was fearful that that would happen to the rest of the country.”

What an extremist wacko! Who believes immigration will tend to make America more Democratic-voting, other than all Democratic politicians and strategists?

Seriously, it’s really not that complicated why a patriotic Jewish kid from Santa Monica like Stephen Miller would support Likud Lite immigration policies for his own country. The Jewish immigration restrictionist intellectuals from Southern California such as David Horowitz, Mickey Kaus, and various low-key friends of Ann Coulter tend to be aware that the kind of immigration policies that are good for Israelis would also be good for Americans.

A more difficult question is why other American Jewish pundits are so oblivious to this straightforward logic.

Julia Ioffe [Email her]  has spelled out her own motivation — she takes Miller’s proposed restrictions on Muslim immigrants coming to America as a personal insult because her family arrived in the United States in 1990 as refugees from the post-Berlin Wall Gorbachevian Soviet Union. The Jackson-Vanik act had singled out Jews from the Soviet Union for special immigration preferences:

So, ironically, Julia Ioffe has made herself an obvious example that America has a tradition of immigration policies based on religion/ethnicity. This may help explain why she can’t come up with substantive objections to Miller’s worldview.

My guess is that Ioffe is smart enough to find crimestop a little painful: she’s aware that the Sailer/Miller view of how the world works makes more sense than the conventional wisdom, but she also has her career to consider.

Ioffe reminds me of a conversation I had with a Russian immigrant 15 years ago who was very relieved when I told him American journalists were hypocrites:

“Hypocrite I understand. I grow up in Soviet Union. Lying to save your job, that’s life. No, I was very worried smart people in America weren’t hypocrites. You know, this country is supposed to be land of free, home of brave. I was scared that smart Americans weren’t hypocrites, but instead were hallucinating. I am very happy to hear they’re just hypocrites. Hypocrisy much less scary than mass hallucination.”