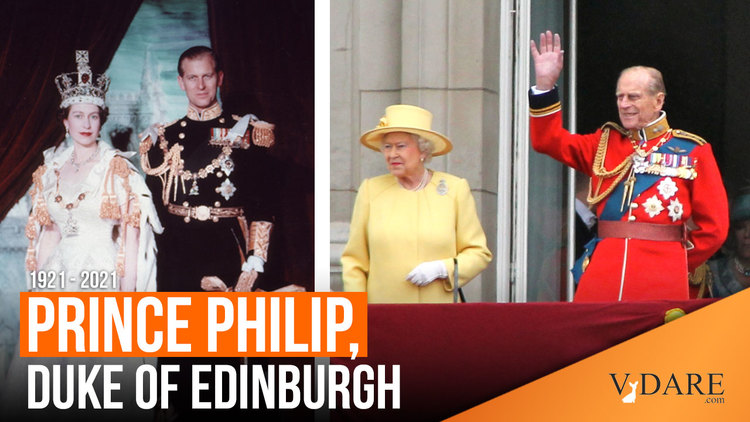 The royal consort of the UK has died at age 99. An acerbic individual, here are a selection of Prince Philip’s greatest hits, including his long-running wars against Tom Jones and Elton John, from a 2011 article in The Independent:

2. "Ghastly." Prince Philip's opinion of Stoke-on-Trent, as offered to the city's Labour MP Joan Walley at Buckingham Palace in 1997.

7. "How do you keep the natives off the booze long enough to pass the test?" Asked of a Scottish driving instructor in 1995.

8. "Damn fool question!" To BBC journalist Caroline Wyatt at a banquet at the Elysee Palace after she asked Queen Elizabeth if she was enjoying her stay in Paris in 2006.

11. "We don't come here for our health. We can think of other ways of enjoying ourselves." During a trip to Canada in 1976.

13. "British women can't cook." Winning the hearts of the Scottish Women's Institute in 1961.

15. "What do you gargle with - pebbles?" To Tom Jones, after the Royal Variety Performance, 1969. He added the following day: "It is very difficult at all to see how it is possible to become immensely valuable by singing what I think are the most hideous songs."

16. "It's a vast waste of space." Philip entertained guests in 2000 at the reception of a new £18mBritish Embassy in Berlin, which the Queen had just opened.

18. "If it has four legs and it is not a chair, if it has got two wings and it flies but is not an aeroplane and if it swims and it is not a submarine, the Cantonese will eat it." Said to a World Wildlife Fund meeting in 1986.

22. "I would like to go to Russia very much - although the bastards murdered half my family." In 1967, asked if he would like to visit the Soviet Union.

24. "Oh, it's you that owns that ghastly car is it? We often see it when driving to Windsor Castle." To neighbour Elton John after hearing he had sold his Watford FC-themed Aston Martin in 2001.

28. "You must be out of your minds." To Solomon Islanders, on being told that their population growth was 5 per cent a year, in 1982.

30. "Your country is one of the most notorious centres of trading in endangered species." Accepting a conservation award in Thailand in 1991.

34. "If you travel as much as we do you appreciate the improvements in aircraft design of less noise and more comfort - provided you don't travel in something called economy class, which sounds ghastly." To the Aircraft Research Association in 2002.

39. "I wish he'd turn the microphone off!" The Prince expresses his opinion of Elton John's performance at the 73rd Royal Variety Show, 2001.

49. Philip: "Who are you?" Simon Kelner: "I'm the editor-in-chief of The Independent, Sir." Philip: "What are you doing here?" Kelner: "You invited me." Philip: "Well, you didn't have to come!" An exchange at a press reception to mark the Golden Jubilee in 2002.

51. "Any bloody fool can lay a wreath at the thingamy." Discussing his role in an interview with Jeremy Paxman.

52. "Holidays are curious things, aren't they? You send children to school to get them out of your hair. Then they come back and make life difficult for parents. That is why holidays are set so they are just about the limit of your endurance." At the opening of a school in 2000.

58. "I have never been noticeably reticent about talking on subjects about which I know nothing." Addressing a group of industrialists in 1961.

59. "It's not a very big one, but at least it's dead and it took an awful lot of killing!" Speaking about a crocodile he shot in Gambia in 1957.

71. "It is my invariable custom to say something flattering to begin with so that I shall be excused if by any chance I put my foot in it later on." Full marks for honesty, from a speech in 1956.

73. "In education, if in nothing else, the Scotsman knows what is best for him. Indeed, only a Scotsman can really survive a Scottish education." Said when he was made Chancellor of Edinburgh University in November 1953.

84. "What about Tom Jones? He's made a million and he's a bloody awful singer." Response to a comment at a small-business lunch about how difficult it is in Britain to get rich.