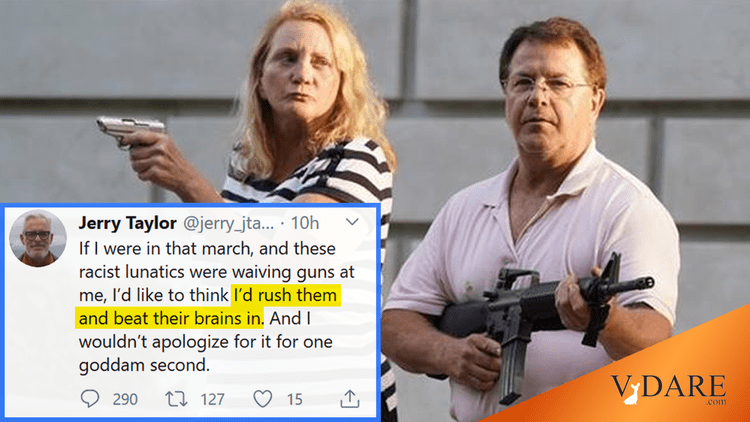 Progressive Antiquarianism: Hating Riot Victims Because Of Their Ancestors' Past

As I’ve been pointing out for lo these many years now, progressives have lost all interest in recent history (roughly post-Emmett Till) and now obsess about the increasingly distant past.

For example, today when yet another delegation of Mostly Peaceful Protesters broke through a gate and onto private property in St. Louis, a rich couple who have painstakingly restored one of the city’s most magnificent mansions brought their guns out onto their porch to make sure the mob kept moving on past. New York Times editorialist Binyamin Appelbaum immediately explained the antiquarian angle that justifies breaking and entering:

That St. Louis mansion was built by the Budweiser family, which for decades employed few blacks. It sits on a gated street for the most affluent (white) residents of a poor and heavily black city. Point being, the guns aren't new. They just usually don't waive them around.

“Binyamin Appelbaum is the lead writer on business and economics for the Editorial Board of The New York Times,” so he knows all about the evil “Budweiser family” “waiving” guns around.

I read his mother Diana Muir’s book Reflections in Bullough’s Pond, a Malthusian history of economic development in New England. It’s quite good. I look forward to her next book:

My current project is a book with the working title Nationhood: The Foundation of Democracy.

The shared culture that we call nationhood has the apparently unique capacity to create a degree of social trust that makes it possible for large populations to enjoy civil liberties and participatory government. Absent nationhood, electoral systems fracture, are manipulated by the wealthy, ratify dictatorship, descend into violence, succumb to military coups, or become paralyzed by ethnic bloc voting.

Meanwhile, Jerry Taylor, the president of the Niskanen Center think tank, is fantasizing about how he would have gone all Lawrence Taylor on the homeowners:

Who Jerry Taylor wishes he were the brother of: