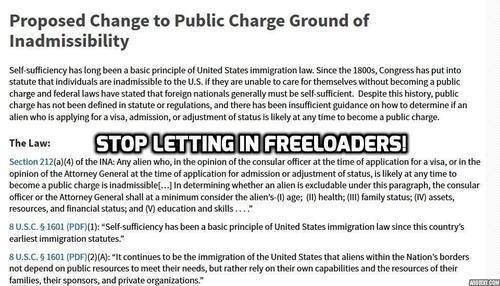 A few days ago, I had an article here at VDARE.com, Next Monday Is Deadline For Public Comments On Aspiring Immigrants' Welfare Use. Do It NOW!  I was urging readers to submit comments supporting the Department of Homeland Security's proposed changes to the rule against granting lawful-permanent-resident status to people who are dependent, or might become dependent, on welfare.

In short, why should we admit people who can't support themselves and their own families and who would, thus, make the nation's disastrous looming showdown with unsustainable entitlement spending even worse?  (Recommended reading: The High Cost of Good Intentions: A History of U.S. Federal Entitlement Programs, by John F. Cogan, 2017, Stanford University Press, Stanford.)

The deadline for comments on the rule is tonight (December 10) at 11:59 p.m. Eastern Time.  The portal for submitting comments is here.

You're reluctant to do this?  You don't have the time?  You don't know enough?  Well surely you can do better than opponents of the rule change such as David Stone, on December 5:

This is stupid, we are all immigrants.

Or how about this one, by Rachel Lesser, also on December 5:

May the Trump administration be woken up by he Statue of Liberty falling on their empty heads! We are a COMMUNITY who must help the oppressed. We are the descendants of these very people.

We must welcome these people and help them to survive until they can ...and will....stand on their own just as generations of immigrants have enhanced this country before them.

People such as Stone and Lesser and the vast majority of the anti-rule-change commenters should be locked in dark theaters with the NumbersUSA "gumballs" video playing on an endless loop until the light seeps into their thick skulls.

But meanwhile, VDARE.com readers can get useful education and inspiration from the detailed comments submitted by Steve Camarota, research director at the Center for Immigration Studies [CIS] and by Jason Richwine, an independent policy analyst who does some work with CIS.  Both of them are immensely informed—from veritable immersion in Census Bureau data—about the realities of welfare use by the existing immigrant population, with obvious implications for what the rule against admitting immigrants likely to be public charges needs to say.

So invest the necessary ten minutes (at most) in reading the Camarota and Richwine comments, pick a point or two to focus on with a brief comment, and go for it.  Here's the comment portal again: https://www.regulations.gov/comment?D=USCIS-2010-0012-0001