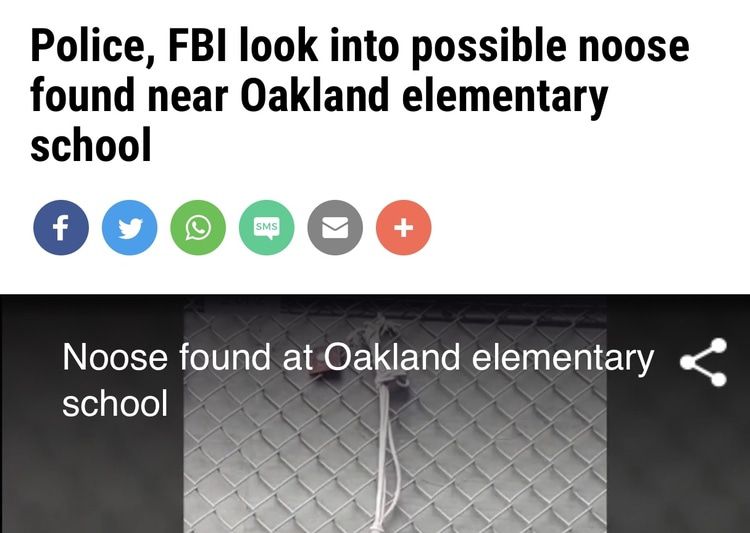 Empires the gods will destroy they first make absurd:

OAKLAND (KRON) — What appears to be a noose was found Friday morning at a batting cage near Chabot Elementary School in Oakland, according to OUSD spokesperson John Sasaki.

Less than three weeks ago, a rope in the form of a noose was reported at the same school.

Officials say the FBI is now involved, but determine neither case rises to the level of a hate-crime.

Apparently the first case was an accident, but the school is taking this very seriously due to the context of the image.

While the sleuths at the FBI work tirelessly to fabricate a dossier implicating Trump for this troublesome twine, some dad who watches his son and his friends climb to the top of the batting cage the rope was hanging from explained to shocked reporters that ropes are often used for climbing:

“They know young people who actually climb on top of that batting cage,” a little league coach said. “So they think possibly it was used as something to climb up and down from that point.”

“They could be climbing over the fence to get into the field and using that as a way to put their foot in and get down,” one parent said.

There are cameras on campus but none of them were pointing in the direction of where the ropes were found.

The news report refers to this innocuous stirrup as “a shocking image.”

This is not from The Babylon Bee. This is passed off as a real story in late stage imperial America. She is unserious and unrecoverable.

“Even the image of a possible noose is something that brings up all kinds of very hard emotions for a lot of people because it is such a symbol of the ugly history of the United States.”

Some of the hardest emotions I experienced as a child were spent in front of a cathode ray tube television set. No, not watching the Rodney King riots. It was much harder than that: According to the most recent report I can find from the Oakland PD, the city’s homicide clearance rate is 56%.