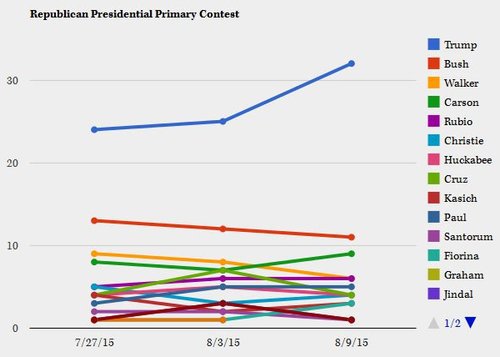 Once again, Donald Trump was pronounced dead as the entire Beltway Right joined forces to drive him out of the party.

And once again, this happened:

Two new polls released Monday show a surge of support for Donald Trump in the Republican race for president, with Carly Fiorina said to be on fire and Rand Paul called “the biggest loser” in the early voting state of Iowa.

Trump experienced a seven-point jump in the Morning Consult poll, leading the GOP pack at 32 percent. His next closest rival, former Florida Gov. Jeb Bush, clocked in at 11 percent. Trump’s cushion is so large in the survey, he leads the next three candidates combined.

One explanation? If rivals wanted to go after Donald Trump, there is plenty of material they could go after on policy. But no one seems to be doing that.

Instead, over the last week, attacks on Trump have focused on two lines of attack.

1. Trump was rude to Megyn Kelly.

The problem with this line of attack is that many conservatives were simply disgusted with Megyn Kelly recycling a left wing talking point disguised as a question. And many of the conservatives who were White Knighting for Kelly were not so chivalrous when it came to other women.

For example, Kevin Williamson at National Review said Trump was being "ungallant" [Trump, All Bluster and Babbit, August 7, 2015]. This from a man who called Melania Trump a "plastic surgery disaster wife," in his June 16, 2015 column Witless Ape Rides Escalator. Williamson's opinion does not seem to be shared by the hoi polloi who believe it is time America had a Slovenian First Lady.

I fail to see the problem here

2. Trump is a fake conservative or a Hillary plant.

The problem here is that Conservatism Inc. can't decide whether Trump is a Hillary Clinton stooge or a dangerous fascist (with evil "mouth-breathing supporters" in Jonah Goldberg's phrase) who threatens to overturn the established order. Trump's Huey Long style boasting about buying politicians makes him seem an unlikely tool of the party bosses. So again, ordinary people can't take the conspiracy theories about Trump seriously.

As Donald Trump continues to overwhelm media coverage of the Republican presidential primary and threatens to defy traditional political logic by remaining atop the polls, rival GOP campaigns are beginning to diverge on how to handle him.

Some campaign teams are downright flabbergasted by his endurance. Others are privately unsure on what it will take for him to ultimately implode. But what's abundantly clear is that all are burning time wrestling with how exactly to deal with The Donald on a day-to-day basis.

If nothing else, it's fun to watch them squirm.