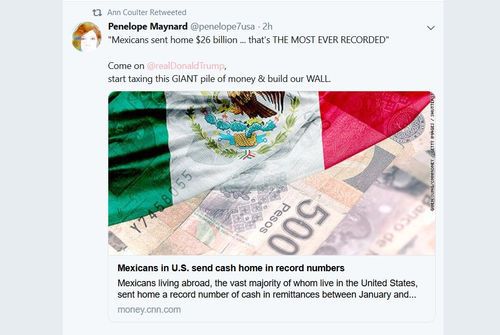 Remittance Tax Or Bust: Democrats Won't Give Taxpayer Money, So What Next?

President Donald Trump has been trying to put pressure on the Democrats to give him money for the proposed border wall.

Of course, this should have been done as the first priority upon taking office, but this is where we are now. The Democrats, enjoying the all but unanimous support of the Main Stream Media, are not feeling any pressure to give the president one dollar. Incoming Speaker of the House Nancy Pelosi is already telling President Trump the wall is a non-starter.

House Minority leader Nancy Pelosi is willing to give "nothing for the wall," she said in an interview clip that was tweeted on Wednesday -- the 12th day of the government shutdown and the eve of the Democratic-majority 116th Congress' swearing in.

Pelosi, Senate Minority Leader Chuck Schumer and other congressional Democrats have rejected President Donald Trump's calls for $5 billion of funding for a wall on the southern border.
"Are you willing to come up and give him some of this money for the wall?" NBC's Savannah Guthrie asked Pelosi in an interview slated to air in full Thursday.
"No, no. Nothing for the wall," Pelosi replied. "We're talking about border security."
"We can go through this all back and forth -- no," Pelosi added. "How many more times can we say no? Nothing for the wall."
[Pelosi says Democrats will give "nothing for the wall," by Caroline Kelly, CNN, January 2, 2019]

Certainly, with some Senate Democrats preparing for the 2020 presidential campaign, the next Congress will be dominated by progressives trying to prove their ideological bona fides for the base. Few will be in a mood for compromise, and rather than working with the president, they are already preparing for his impeachment [Arizona Democrat says neither party should eliminate 'impeachment' from vocabulary, The Hill, December 31, 2018].

The president's strategy thus far smacks of weakness. However, as from the very beginning of his term, he could turn this around and keep his campaign promise of making "Mexico pay for the wall" though a remittance tax. As Ann Coulter memorably put it, "Just to keep the conversation interesting, why doesn't Trump mention REMITTANCES?"

As argued here earlier, President Trump could also make an address from the Oval Office on immigration policy.

Finally, and most importantly for a supposed "authoritarian," President Trump is astonishingly fearful about using the power of his office. There are a number of actions he could do, right now, based on a recent Supreme Court ruling.

The Supreme Court ruled in Hawaii v. Trump that the president has broad statutory authority to make natural security judgments when it came to immigration. The Immigration and Nationality Act gives the president authority to “deny entry to any alien or class of aliens” whenever he “finds” that those class of aliens “would be detrimental to the interests of the United States.”

Using that executive authority, Trump should start throwing out executive orders on everything regarding immigration from the citizenship question for anchor babies to withholding visas to broad classes of foreign nationals. He should announce that he’s authorizing the State Department to stop the visa approval process and order the military to build tent cities and barriers on the border.

Hardball actions will add pressure not only to Democrats but also business-first Republicans who want cheap labor.

[Here's how Trump can finally make progress on immigration (and it's not a government shutdown, by Ryan Girdusky, Washington Examiner, December 12, 2018]

Simply expecting Democrats to cave at a time is a recipe for failure. The president's back is to the wall, but he has not yet begun to fight. Tweeting won't cut it. If he brings up remittances, we may even thank the Democrats for forcing President Trump to really make Mexico "pay for the wall."