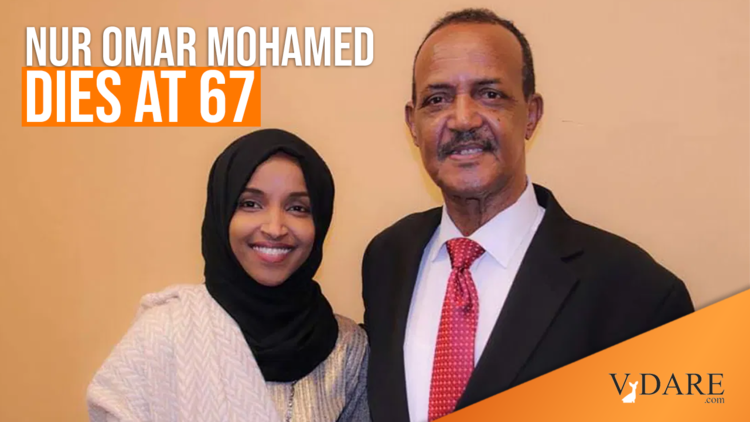 I’d always read that Rep. Ilhan Omar (D-MN) was the daughter of a “teacher,” but from obituaries it appears her father was a Soviet-educated colonel in the army of genocidal Somali dictator Siad Barre. From Sahan Journal:

‘He was loved by everyone’: Somali community remembers Nur Omar Mohamed, who died of COVID-19

Best known in the U.S. as Ilhan Omar’s father, Nur was a prominent Somali military officer who encouraged his children to succeed

Nur Omar Mohamed was an esteemed senior officer in the Somali National Army well before the country plunged into anarchy following the fall of the Siad Barre regime in the early 1990s.

A few years after that, he ended up in Minnesota with his family. Most Americans knew nothing about his prestigious career as a colonel who led a successful regiment in the Somali-Ethiopian war during the late 1970s. To them, he was just another faceless Somali refugee.

He picked up jobs as a cab driver and postal worker to make ends meet. But more than two decades later, he regained some of his lost status through his daughters Ilhan Omar, who became the first Muslim lawmaker to wear a hijab in the United States Congress, and Sahra Noor, a health care executive.

Nur died Monday from COVID-19 complications at the Hennepin County Medical Center in Minneapolis. He was 67.

Nur was born in Bandarbeyla, a coastal town in northeastern Somalia, and grew up in Mogadishu, where he completed his middle and high school education, relatives said.

He joined the Somali National Army after obtaining a military education in Russia, Faraton said. Thousands of Somali students in that decade received scholarships from the Soviet Union to train as medical doctors, technicians and military specialists.

When he returned to Somalia, Nur began his climb in the military hierarchy, eventually becoming a colonel. During the 1977-1978 Somali-Ethiopian war, he led a regiment, Faraton said.

Somalia was a Soviet client at the time, but when they attacked newly Communist Ethiopia, Moscow said, “Hey, wait a minute, Ethiopia has a much bigger population than Somalia and it rains in Ethiopia.” So the Soviets switched sides to backing Ethiopia and Somalia was defeated. Somalia became a minor US ally.

“Nur played a significant role in the war,” he added. “He was one of the officers who were recognized for their work.” …

Nur’s prestigious career in the military ended in 1991 after the Barre regime was ousted, and the country sank into civil war. The family escaped to Utange refugee camp in Kenya.

Four years later, in 1995, Nur and his family arrived in the U.S. as refugees. The family spent the first two years in Arlington, Virginia, before moving to Minneapolis and establishing a permanent home in the Cedar Riverside neighborhood.

Here, Nur was no longer the affluent colonel he was in Mogadishu. …

But this loss of status wasn’t unique. In The New Immigration: An Interdisciplinary Reader, Carola Suárez-Orozco wrote that new immigrants and refugees from middle-class backgrounds “frequently find employment in positions far below their training and qualifications because of language difficulties, lack of connections, or lack of certification in certain professions.”

How many refugees get mad at America because they were big shots back home but here they are only qualified to drive cabs and sort mail?