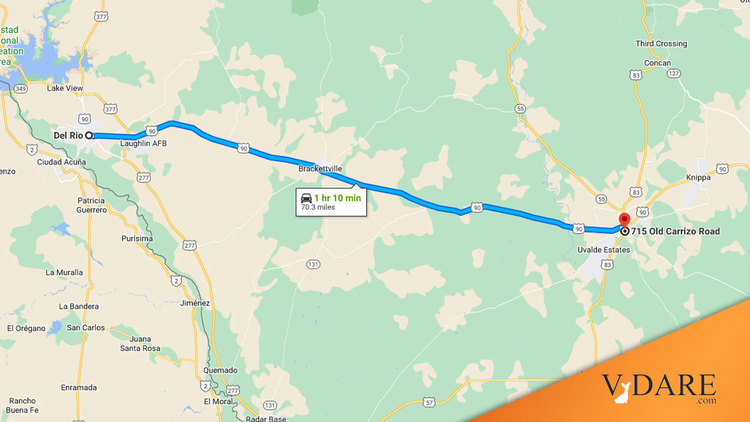 The preliminary report on the mass shooting at Robb Elementary School in Uvalde, Texas, which left 19 pupils and two teachers dead, indicates that it was partly the fault of Traitor Joe Biden’s border treason. Of course, the report doesn’t say that. But one section suggests it by describing why school security was lax [House Investigating Committee on the Robb Elementary Shooting, Texas House of Representatives, Interim Report, 2022].

Human traffickers and their border-jumping passengers won’t stop for border agents or police, and instead flee until they’re cornered, then bail out of their vehicles and scatter. Those “bailouts” have triggered so many alerts and lockdowns at schools that authorities might well have thought shooter Salvador Ramos was an illegal alien on the run. Uvalde is about 80 miles from Del Rio, the hottest spot for illegals to jump the border.

One “factor contributing to relaxed vigilance on campus was the frequency of security alerts and campus lockdowns resulting from a recent rise of ‘bailouts’—the term used in border communities for the increasingly frequent occurrence of human traffickers trying to outrun the police, usually ending with the smuggler crashing the vehicle and the passengers fleeing in all directions,” the report says:

The frequency of these “bailout”-related alarms—around 50 of them between February and May of 2022—contributed to a diminished sense of vigilance about responding to security alerts [emphasis added]. …

Uvalde CISD Director of Student Services Kenneth Mueller testified that since February 2021, high-speed chases have been a daily event in the Uvalde area, causing Uvalde CISD schools to be secured or locked down frequently, with 47 “secure” or “lockdown” events happening since late February 2022, and approximately 90% of those being attributed to bailouts. Uvalde CISD parents became so concerned about the number of bailouts occurring near the elementary-school campuses that they offered to hire off-duty police to supplement the Uvalde CISD police presence [emphasis added].

And just who is responsible for securing the border but has refused to do so? The Biden-Mayorkas Axis of Treason.

So there you have it. Biden’s pushing the Great Replacement is partly responsible for the mass murder of 21 people.

Stupid Party strategerists can add this to the list of high crimes and misdemeanors they will use to impeach Let’s Go Brandon, Vice President Word Salad, and, of course, Mayorkas, the unindicted Cuban-Jewish visa fixer.