There are billions of people on earth who would benefit economically by relocating to the United States, so many are happy to claim victimhood as a refugee or asylum seeker to wangle a way in.

But just being a poor human on earth is not enough to qualify for asylum in the US. In fact, the acceptance rate for asylum seekers fell to less than one percent over the last year under the current tightened rules.

Refugee resettlement costs the taxpayers $1.8 billion annually, according to a study published by the Federation for American Immigration Reform (FAIR) in 2018. So less is better for everyone, particularly in the home countries which could benefit greatly from reformist movements rather than citizens who dream of escaping rather than fixing the place.

Tucker Carlson recently discussed the Republican governors who succumbed to the pleas of resettlement moochers and actually have requested more refugees for their states—bad craziness!

TUCKER CARLSON: If you remember that far back, during President Barack Obama’s second term, Republican leaders in the Congress made a big show of opposing the Obama administration’s refugee policy. Obama wanted to settle tens of thousands of refugees who had fled Syria’s civil war in the United States, and at the time 25 Republican governors demanded the right to keep them out. Now the left accused them of Racism! of course but there are good reasons to take the position they did.

For example, properly vetting refugees is really hard, often it’s impossible. Some of the refugees, they pointed out, might not even be Syrian. That was true for sure in Europe with the refugees. Some of them might be Islamic extremists, but terrorism was not the only worry they had.

America’s middle class is in decline. We already have more than 20 million illegal immigrants living here. The last thing many struggling communities need is more low skilled migrants who may be great people but need a lot — stress the schools and the social programs, while not fully integrated.

That’s just true, and anyone who lives in a community where it’s happened will tell you that it’s true.

As with illegal immigration, a long-term agenda of refugee resettlement is to bring in future Democratic voters — obviously — so before she became the most anti-American member of Congress, Ilhan Omar was a refugee.

So at the time the Republican governors got their wish, and President Trump won the 2016 election. In 2019 he issued an executive order allowing cities and states to opt out of refugee resettlement —that’s the last time we checked in on this story.

Have their voters demanded this? No, so what’s going on here?

Ned Ryun is the founder of American Majority and author of Restoring our Republic. He joins us tonight. So Ned, I don’t think there’s any evidence that Republican voters in the states have been begging their Republican governors to move more refugees in, so why are these governors literally asking the federal government to do this?

NED RYUN: This is unreal, Tucker. I mean again you pointed out that Trump gave them a strong backstop back in September and said you can opt out of this with his executive order and now you have these 18 Republican governors saying no, we want more, and they’re saying well we’re following our hearts, this is Christian charity in action.

I got to say this, Tucker, as a active devout evangelical Christian, refugee resettlement has nothing to do with Christianity and has everything to do with the immoral behavior of these governors and quite frankly a perverse incentive for these government funded charities that are acting as refugee contractors, grifting off the American taxpayer.

Michelle Malkin’s written about some of this, but the US State Department is paying these refugee contractors over $2100 per refugee of which they get to keep 45 percent, and then they’re doing this this campaign on these governors saying you have to put your Christian charity into action, and in an act of cowardice, most of these governors from red states are giving in to this. (Continues)

Near the end of the interview, Tucker said of the governors, “I really wish we had run their names on the screen” — although the televised map provides some hints. 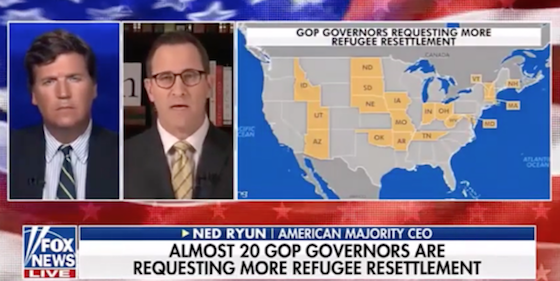 Helpfully, Breitbart listed the governors in an article, so feel free to contact one or all with your reaction regarding their ill-considered generosity:

A total of 17 Republican governors thus far have approved more refugee resettlement for their states, along with five Democrat governors who govern red states.

For Fiscal Year 2020, President Donald Trump will continue cutting refugee admissions by reducing former President Barack Obama’s refugee inflow by at least 80 percent. This reduction would mean a maximum of 18,000 refugees can be resettled in the U.S. between October 1, 2019, and September 30, 2020. This is merely a numerical limit and not a goal federal officials are supposed to reach.

Coupled with the refugee reduction, Trump signed an executive order that gives localities, counties, and states veto power over whether they want to resettle refugees in their communities.

To date, these Republican governors in 17 states have asked the Trump administration to continue resettling refugees in their states: