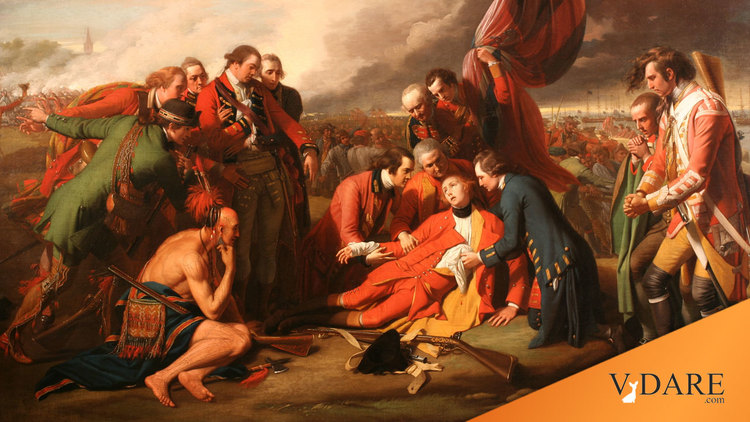 Ross Douthat Rooting For The French In 1759: "The War That Made The World"

Earlier: Thanksgiving—History From The Enemy's Point Of View

Two hundred and sixty-six years ago this month, a column of British regulars commanded by Gen. Edward Braddock was cut to pieces by French soldiers and their Native American allies in the woods just outside today’s Pittsburgh. The defeat turned into a rout when Braddock was shot off his horse, leaving the retreat to be managed by a young colonial officer named George Washington, whose own previous foray into the region had lit the tinder for the war.

This was the beginning of the French and Indian War (also known, much less poetically, as the Seven Years’ War), which I thought as a boy was the most interesting war in all of history.

… Indeed, from a certain perspective, it was more important than the American War of Independence: The Revolution merely determined in what form Anglo-America would spread to embrace continental empire and global power, while the French and Indian War determined whether that continent-spanning America would come into being at all.

As a kid, I — a good patriotic American and stalwart New Englander — naturally rooted for the British and the American colonists …

For an adult, though, … it’s easy enough to end up rooting for the French.

First, because they were obvious underdogs — New France had less than a fifteenth of the population of the 13 colonies, it was constantly being cut off from its motherland by the British Navy, and it’s something of a miracle that it lasted for as long and won as many victories as it did.

But also because the French empire in North America represented an unusual model of European colonization: The combination of the smaller, scattered population, the harsher climate and the distinctive vision of figures like Samuel de Champlain and the French Jesuits all contributed to a friendlier relationship with Native American populations than obtained in the English colonies.

So a world where the French somehow held on to their territories might have been more Catholic (obviously a good thing) while offering more possibilities for Indigenous influence, power and survival than the world where England simply won the continent. …

Imagining an alternative timeline, a history in which New France endures and a more, well, “French and Indian” civilization takes shape in the Great Lakes region, isn’t exactly the stuff of the patriotic American education that I wrote about last weekend.

But it also makes a poor fit with contemporary progressive pieties, in which organized Christianity is a perpetual scapegoat for the mistreatment of Native peoples — since it was arguably the power of the church and the Catholic ancien régime in New France, relative to the greater egalitarianism, democracy and secular ambition in the English colonies, that helped foster a more humane relationship between the French colonizers and the Native American population.

If Montcalm had defeated Wolfe at the Battle of Quebec in 1759, then Latin America North might well have developed somewhat like Latin America South, such as Mexico, Haiti, Cuba, Brazil, and Argentina. How’d that work out, anyway?