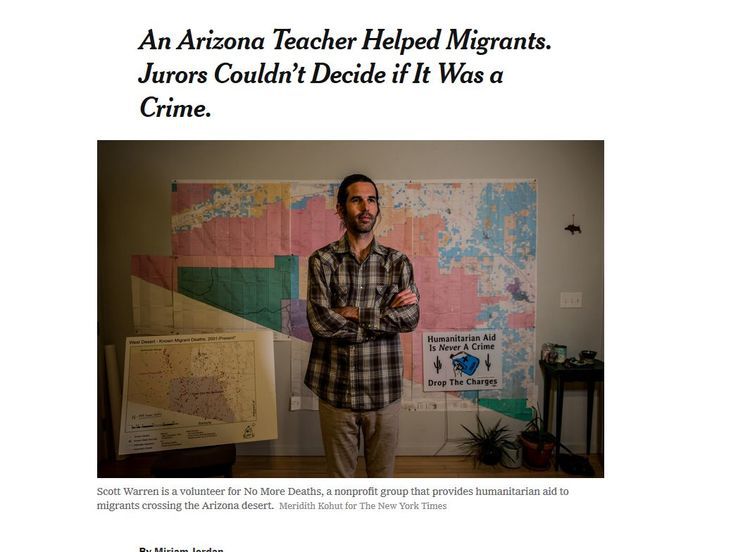 In an ever so strange event, a mistrial was declared in the case of Scott Warren, an alien smuggler who works with a larger alien smuggling group, Pueblo Sin Fronteras and that organization’s leader, Irineo Mujica, also organizer of the many, many illegal aliens who have entered the United States as part of caravans of illegals from all over the world.

Mr. Warren’s case resulted in a mistrial Tuesday, after jurors said for a second day that they were unable to reach a verdict. Judge Raner C. Collins of the Federal District Court in Tucson set a conference for July 2 to discuss how to proceed.

[An Arizona Teacher Helped Migrants. Jurors Couldn’t Decide if It Was a Crime, by Miriam Jordan, NYT, June 11, 2019]

The strangeness is that the jury deliberated less than two days. In most Federal courts, judges are openly hostile to juries who deadlock. Deadlocks are quite common in State level cases, but Federal judges usually keep a strong whip hand over jurors. Judges want a decision one way or another.

Jurors had announced on Monday that they were deadlocked, but they resumed deliberations on Tuesday after the judge ordered them to try again — one sign of the difficult questions raised by the case.

To date, the vote tally of the jury was not announced. This is telling for the defense, as the criminal defense bar usually trumpets a hung jury with a majority voting for acquittal, but the response of the defense, was less than enthusiastic, mostly just boilerplate concerning a lack of a unanimous vote for conviction suggests a strong vote for conviction.

“Scott Warren remains innocent, both as a legal matter and as a factual matter, because the jury could not unanimously conclude otherwise,” the lead defense lawyer, Gregory Kuykendall, said after the jury was dismissed. “The government put on its best case with the full force of countless resources, and 12 jurors could not agree with that case.”

So, at this point your correspondent will speculate that there was a majority for conviction. Most likely there was one or two holdouts for acquittal, but based on an ideological position in support of the crime that occurred. That is, OJ Simpson jurors.

But back to the deadlock and Federal judges. A mere two days deliberating and then a judge accepting a hung jury in a Federal court is unheard of. In a normal case, the judge would have sent the jurors back for a few more days, especially since there were no facts in dispute in the case. Warren wrote an Op Ed in the Washington Post admitting his crime during the trial. [I gave water to migrants crossing the Arizona desert. They charged me with a felony, May 28, 2019] alone should have caused Judge Raner Collins to send the jury back for further deliberations, but this was enough to actually question the recalcitrant jurors as to their motivations for an not-guilty vote. Jurors take an oath to both try the case as to the facts, evidence, and the law. Ignoring facts and evidence are violation of that jurors oath and contempt of the court. If a juror was holding out for ideological motives, juror nullification, that juror or jurors should have been questioned as to their motive and, if found to be acting outside of their oath, removed from the jury and replaced with alternates. 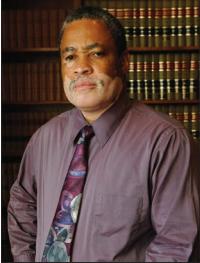 And the mystery is why this did not occur. Not much of a mystery when you see this:

Judge Collins, who was appointed by President Clinton in 1998…

And is, of course, black. Which suggests just another bad black lawyer problem. Not surprisingly, he allowed one or more jurors to act outside the law, facts, and evidence, for his own political ends, a violation of his own oath of office. Just as I have written about kritarchs interfering with the administration of immigration law, so this incident was another case of sabotage of immigration enforcement by activist judges. Judge Collins also participated in the multiple attempts to railroad Border Patrol Agent Lonnie Swartz.

Time for Raner Collins to be held before the bar of impeachment. Or at least the U.S. Attorney for Arizona should retry the case. We’ll see if Robert Barr is running the Justice Department or not.