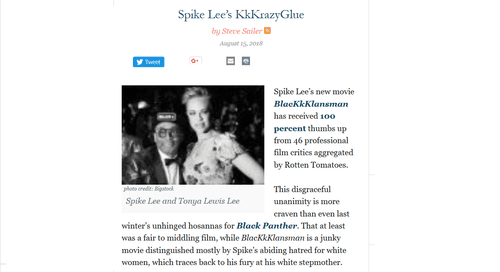 From my new column in Taki’s Magazine, my review of Spike Lee’s acclaimed film BlacKkKlansman:

This disgraceful unanimity is more craven than even last winter’s unhinged hosannas for Black Panther. That at least was a fair to middling film, while BlacKkKlansman is a junky movie distinguished mostly by Spike’s abiding hatred for white women, which traces back to his fury at his white stepmother.

The other amusing aspect of BlacKkKlansman, a 1970s period drama about a black undercover cop with an immense Afro, is that it comes pre-parodied by the 2002 Eddie Griffin comedy Undercover Brother, which was directed by Spike’s less overpublicized cousin Malcolm D. Lee.

You could imagine that Undercover Brother was intended as an unkind satire on BlacKkKlansman, except that it came out sixteen years earlier. Perhaps old family reunions had given cousin Malcolm a preview of Spike’s enduring phobias and fixations?

For compare and contrast purposes, here is the trailer for Spike Lee’s BlacKkKlansman:

And here is the trailer for Malcolm D. Lee’s Undercover Brother:

Who is parodying whom?