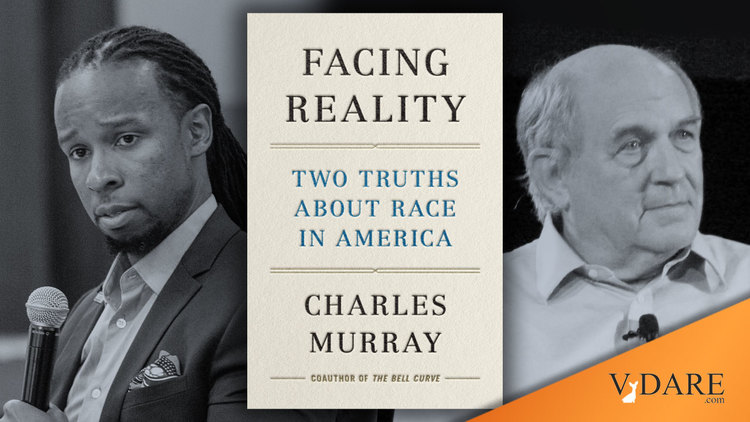 From my book review in Taki’s Magazine:

In January 2020, Murray published a long, scholarly book, Human Diversity: The Biology of Gender, Race, and Class, a meta-meta-analysis of the latest meta-analyses in the human sciences. It received virtually zero publicity.

Now he’s back with a more polemical, less daunting read about the essential factors influencing society: intelligence and violence.

The two realities that are fundamental to understanding the headlines of 2021 are that, on average, blacks and (to a lesser extent) Hispanics are more crime-prone and less smart than whites (much less Asians).

Lately, though, these facts seem inconceivable to most conformist Americans. Still, lying is bad for the soul.

…Despite its short length, Facing Reality uncovers some important data that I’ve never seen before. For example, as I’ve often complained, the well-known FBI crime statistics inextricably confuse white and Latino criminals so that it’s been best just to look at black vs. nonblack rates. For instance, blacks were 8.2 times as likely as nonblacks to be known murder offenders in the federal 2019 stats, but we can’t figure out from the FBI numbers the black-to-white ratio that everybody is most interested in.

Murray, however, has uncovered newly available arrest statistics from the Open Data Initiative by race (with Hispanics usually broken out) and type of crime for thirteen cities, including New York, Los Angeles, Chicago, and Washington, D.C. …

The Hispanic murder rate is atrocious, but, despite roughly equal levels of poverty, the black murder rate is still four times worse. It seems reasonable to me to ask blacks to cut their murder rate by 75 percent, down to the Latino level. Yet, apparently, nobody else does. Instead, The Establishment has taken to apologizing to blacks for their not being above the law. I suspect the national black-to-white murder arrest rate ratio is less than 20 to 1 because these 13 towns tend to be fairly expensive ones where white lowlifes can’t afford to live, while black lowlifes tend to live in subsidized housing in conveniently situated central city locations.