Historical events like the Civil War/War Between The States or the conquest of the American Southwest can continue to create rancor not for years, but for hundreds of years. That's why I was surprised to see, searching Google News, that there are none of the kinds of protest marches on San Jacinto Day that you see on Columbus Day.

San Jacinto Day (April 21) is the anniversary of the final victory of the Texas Revolution, in which Texas won its independence from Mexico. (The Mexicans are still not happy.) One of the earliest articles we published on VDARE.com, April 20, 2001, was Lone Star Setting? San Jacinto Undone, by a writer whose ancestors fought in the Texas War Of Independence—on the winning side.

The San Jacinto Column, the world's tallest monument, was built in 1936 by Sons and Daughters of the Republic of Texas who were proud of what their ancestors had done. It couldn't be built today.

Inscribed on it are these words:

Measured by its results, San Jacinto was one of the decisive battles of the world. The freedom of Texas from Mexico won here led to annexation and to the Mexican War, resulting in the acquisition by the United States of the states of Texas, New Mexico, Arizona, Nevada, California, Utah, and parts of Colorado, Wyoming, Kansas, and Oklahoma. Almost one-third of the present area of the American nation, nearly a million square miles of territory, changed sovereignty.

Of course, as Linda Thom pointed out in Lessons From A Short History Of Texas, Texas history is proof that Immigration Has Consequences.

In obtaining land grants in Texas, Anglo immigrants agreed to become Mexican citizens, obey Mexican laws, accept the official Catholic faith, learn Spanish, and take other steps to become fully assimilated as law-abiding citizens. However, over the years, it became clear that these settlers, now Anglo-Mexicans, were not becoming integrated into the nation and that Anglo immigration had become a problem . . . The strains and disagreements ultimately led to the Texas Revolution in 1835.

There's been speculation that similar modern demographic trends could reverse the success of the Texas Revolution. 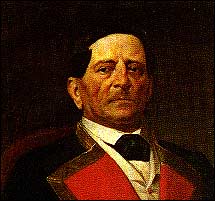 Texas's 38 electoral votes went to Donald Trump in the 2016 election, with 53 percent of the popular vote. Hillary got 43, so perhaps it's not over for Anglos in Texas. But it's worth noting the shape of the electoral map: 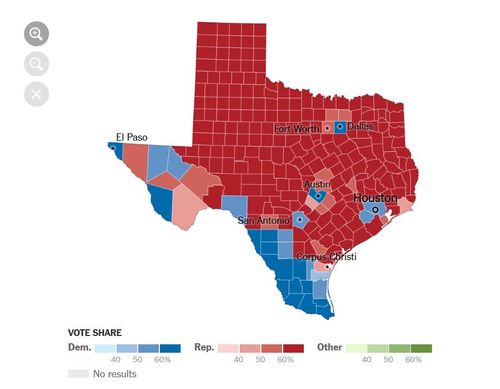 185 years after San Jacinto, Texas is still Texas, but there are people on the border who are loyal to Mexico.