On Friday, Tucker Carlson reported about the failure of the First Step Act, which promised that its early release of non-violent federal prisoners would not free persons who would be likely to re-offend. Certain types of crimes, such as marijuana-related, were presented as the sort which would be appropriate for forgiveness, but instead violent offenses have been included. 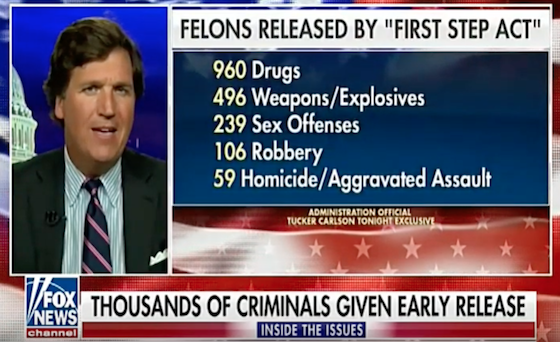 Senator Tom Cotton appeared to discuss his objections to the bill, which he called deeply flawed at the time of debate.

Citizens are left to ask why legislators are so deaf to the prime directive of public safety — do felons have a lobbying group other than the Democrat party?

TUCKER CARLSON: Thanks to the recently passed the First Step Act, more than 3,000 criminals have been released early from federal prison. You remember when the First Step Act was being debated, we were all told that only nonviolent criminals would be the beneficiaries of the law.

Some, like Senator Mike Lee of Utah told us that the Bill would not provide early release to criminals, only incentivize participation in so-called recidivism reduction programs. But that turned out to be completely untrue.

In less than a year, the First Step Act has granted early release to a lot of dangerous people and it didn’t require any of them to do anything to earn it. Here’s one example.

In October 2008, Okin White participated in the robbery — an armed robbery — of a Brooklyn apartment. During that robbery, White and his accomplices tied up two children including a seven-year-old girl. They pistol whipped a woman and threatened to kill her and her entire family if she didn’t reveal where the cash and the drugs were hidden.

Every victim of that robbery had be hospitalized; one, for more than a week. Now, White would still be in prison right now where he deserves to be, but thanks to the First Step Act, he was released last week. Here’s the key. He didn’t join any recidivism reduction program. Instead, since the Bill retroactively increased his good behavior credits, his sentence was simply shortened. White didn’t have to do anything. He is out of federal prison now along with hundreds of other people like him convicted of sex crimes, robbery, assault, and other acts of violence.

Remember, these are the nonviolent marijuana users who are getting out early. Right. It’s not true, but Washington doesn’t care. For them, crime is an abstraction. They don’t have to live with the consequences. So, it’s not a big deal. They can feel virtuous, your neighborhood gets more dangerous.

Senator Tom Cotton represents Arkansas. He was one of the most vocal opponents of this law last year and he joins us tonight. Senator, are you surprised?

SEN. TOM COTTON: Tucker, I’m not surprised at all that almost 5,000 serious felons, as you say murderers, sex offenders, robbers, drug lords had been released early under this law. I predicted that this would happen exactly as it has. You could read the plain text of the law and know that thousands of felons are going to be released in just months after its passage.

CARLSON: So, I think of myself as one of the people who you can convince on this. I mean, I think there are people in prison who deserve to be released. I don’t think that everybody who commits a crime should spend the rest of his life in prison, and I believe in rehabilitation.

What I’m infuriated by is they told us that the people getting out early would be sent to recidivism reduction classes; in other words, they would be rehabilitated. And in a lot of cases, as the one we just described, they haven’t been. They’ve just been released early. They lied to us.

COTTON: Well, Tucker, I agree with what you said about the goals of what that legislation should have had, which is trying to get people back on their feet, to give them an education, to help them find the Lord. So, when they leave prison, as everyone does, if they’re not sentenced to death or life without parole, they become a productive member of society.

But it was always the case that thousands of serious felons were going to be released early if that bill passed. I said it at the time, and it’s come to pass now.

CARLSON: I mean, is there anything that could be done about it? I mean, if you’re going to really serious felons — violent felons — then why can’t they go into one of these much talked about recidivism reduction programs? Why do they have to just be released?

COTTON: Tucker, the good news is that Attorney General Bill Barr believes very firmly in law and order, and he is taking a very deliberate and careful approach to crafting some of these programs and the way that prisoners who go into them will be released from prison in the future. His hands have been largely tied, though on these releases up until now.

But just look at what Attorney General Barr did this week in signing execution warrants for five heinous murderers. One, who murdered an eight-year-old girl and her parents just a few miles up the road from where I grew up in Arkansas. It gives you a sense of where Attorney General Barr’s mind is when it comes to criminal justice; that he wants to make sure that we are protecting the vulnerable among us in our communities.

CARLSON: Let me just ask you one final question on this Friday night. I mean, you are again, probably the lead of the opposition to this law. Some people you work with who are your friends supported it. Now that we know that the law isn’t working the way they told us it was going to work, have any of those people come up to you and said, “You know, I was wrong. I’m sorry.”

COTTON; No, Tucker, not many people in Washington, which is a town of a lot of folks who make confident predictions that don’t come to pass have come up and said, “Yes, you told us so.” And I don’t take pleasure in saying, “I told you so.”

You know what has come to pass is what I predicted that thousands of serious and oftentimes violent felons will be released. To my knowledge, none of them have committed a crime yet. I said at the time that given recidivism rates, especially if they don’t go through any kind of anti-recidivism training, they’re likely to commit crimes in the future. I hope I’m wrong in that prediction. But with the thousands of serious felons released early, I fear that I won’t be.

CARLSON: Senator Tom Cotton, thanks so much for joining us tonight. I appreciate it.