There is plenty of chatter about immigration flying around the ethers on a daily basis, but very little concerns the big policy basics of Who and How Many. Senators Tom Cotton (R-AR) and David Perdue (R-GA) have done the nation a service by developing and submitting a bill that recognizes the reduced need for foreign workers (assuming there is any need to import labor — doubtful because automation).

The RAISE legislation as submitted begins:

A BILL — To amend the Immigration and Nationality Act to establish a skills-based immigration points system, to focus family sponsored immigration on spouses and minor children, to eliminate the Diversity Visa Program, to set a limit on the number of refugees admitted annually to the United States, and for other purposes.

I am impressed that the senators included the vile Diversity Visa for the dumpster along with the bigger stuff. The program is often overlooked but shouldn’t be, because choosing immigrants from a random drawing based on diversity is double bad. A visa to increase diversity is simply insane at this point.

The most appealing aspect of the bill is of course the reduction of legal immigration by half. A larger decrease would be better because of the automated future workplace, but half is a good start.

Below, Bloomberg reported in May that the number of foreign-born workers in the U.S. rose to nearly 27 million in 2016, up about 700,000 from the previous year and a new high (America’s Labor Force Is Made Up of More Immigrants Than Ever). 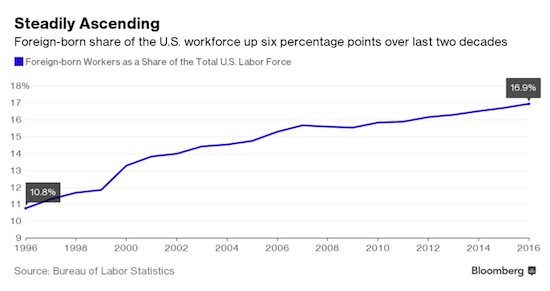 The senators appeared with President Trump on Wednesday in the White House to present the bill to the public (transcript here).

Senators Tom Cotton and David Perdue discussed the legislation with Tucker Carlson later in the day:

PRESIDENT DONALD TRUMP: The RAISE Act ends chain migration and replaces our low-skilled system with a new points-based system for receiving a green card. This competitive application process will favor applicants who can speak English, financially support themselves and their families and demonstrate skills that will contribute to our economy.

TUCKER CARLSON: Senators Cotton and Perdue join us now; thanks to you both. Senator Purdue to you first. When you hear that, the precepts, the principles behind it sound non-controversial; they sound pretty basic. You guys work in politics. I know you’ve polled this. What’s the public opinion of those ideas?

SENATOR DAVID PERDUE: Well this is the the big learning here in Washington; the people out there and the rest of the country get this. Seventy-two percent believe it should be the primary worker plus their nuclear family or less. Eighteen percent, it ought to be just the the worker. So people out there in the real world get this: it’s pro-worker, it’s pro-growth, and it’s been proven to work in Canada and Australia.

CARLSON: What’s interesting, Senator Cotton, when you say this this bill is pro-worker — our current arrangement seems anti-worker. If you look at the effect on wages, working-class people in the country when the Kennedy Act became law, they’ve gone down and remained stagnant. Do you think there’s a direct connection between mass immigration and low wages?

SENATOR TOM COTTON: No doubt, Tucker. I mean the law of supply and demand applies to labor market just like it does to every other market hasn’t been repealed, even though some Republicans feel like it doesn’t apply there. Look, over the last 40 years, my lifetime, you’ve seen a quadrupling of the number of foreign-born residents in our country. The vast majority of those — 14 out of 15 — today come here not based on their skills or their education or their English language ability on some other category. They’re by definition unskilled and low-skilled.

In that 40-year window, if you have high school degree or less, your wages have fallen. If you have more than that, so if you’re not competing with those very same immigrants, your wages have increased. So there’s a direct correlation between the mass unskilled low-skilled migration we’ve seen over the last few decades and stagnant wages and standards of living for working Americans.

CARLSON: Wouldn’t it be clarifying to import — I don’t know — lobbyists for example from abroad who would work for less than our lobbyists? Maybe that. Or United States senators? I think that might change some ideas. [EDITOR: Or how about journalists? Why is there no journalist work visa?]

COTTON: Lobbyists, lawyers — there’s no end of this, that you could import people to compete directly against people in Washington DC and then they sing a different tune.

But there’s just simply no doubt that people who come here who are unskilled and low-skilled have a direct impact on the wages of Americans, whether their ancestors came over on the Mayflower or whether they just took the oath of citizenship, who are competing for those very same jobs.

CARLSON: So Senator Perdue, about 60 million Americans speak a language other than English at home. That’s a dramatic increase over the past 50 years, and it’s getting bigger every year. And it’s bad obviously, it divides the country. Do you think your bill would do something to change that?

PERDUE: First of all, there are several categories that we use in a merit-based system. This is what the president talked about in this campaign: it’s one of the reasons quite frankly I think he got elected, and I gave him high marks for making this a priority in this new administration. But when you look at the categories in here, somebody could come in here and be a PhD with no English skills and still qualify potentially. So this is not about English speaking only, this is about a diverse group of people to come in and help grow our economy.

CARLSON: So what are the criteria?

PERDUE: Well first you’ve got education, you’ve got job, if you’ve been contributory in terms of accomplishment, if you want to start a business or something like that. English is one and then compensation.

CARLSON: So if you want to invest a lot of money, you’re here. So who are the forces arrayed against this?

COTTON: A of people, once they learn about the bill, are actually pretty pleased with it. Again this only focuses on green cards, the million green card recipients every year. It doesn’t focus on temporary visas which can be controversial or anything else. And I would say that it’s better to make a citizen out of someone who comes here rather than just use them as a temporary laborer.

CARLSON: Where’s the Chamber of Commerce on this?

COTTON: I think a lot of them are going to be very supportive of it. Again, if you’re sitting in Silicon Valley and you depend on H1-b visas, wouldn’t you rather have someone who’s going to be a citizen of the United States and be here forever?

CARLSON: Are you all going to make this case publicly? Are you going to force the opponents of this bill to explain why they are against it?

PERDUE: We saw it today, we started a debate today, and we’re going to continue that. I can’t understand why anybody who wants a pro-growth effort in America to oppose this. I mean today, the system is so broken that only one out of every 15 who come in America come in with a skill. This is a broken system and it penalizes people who are who’ve been here and who just got here

CARLSON: Senator Cotton, can you give us the timeline for this?

COTTON: Well immigration’s obviously a complicated and controversial topic, but David and I are committed for the long haul to making this bill a reality. Again, the president campaigned on immigration as a single distinctive issue that separated him not just from Hillary Clinton, but from 16 other Republicans, and the American people expect him to deliver on that. This is one piece of the immigration puzzle. I think as more senators and congressmen learn about it, as they see what it would do for our working citizens and across the country what it would do for economic growth as a whole, I’m hopeful that we can get consensus. Even if there’s still a lot of other things that divide us on the immigration issue.

CARLSON: I think that’s right. You always are welcome here to explain how it’s going because we’re interested, our viewers are.