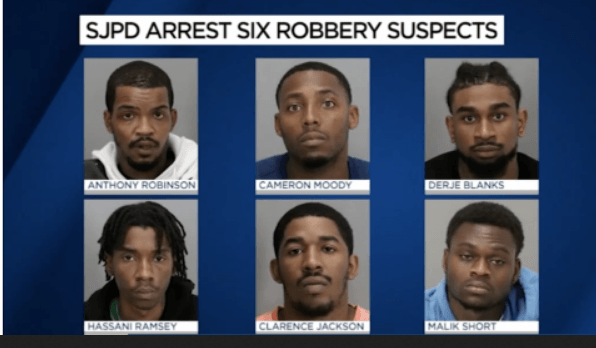 Wait a second. Is the bigger crime acknowledging who has committed the "hate crimes" against more than 100 Asian women, or the crimes against the Asian women? Because the six individuals who have been arrested were all black…

Targeted crimes against the AAPI community across the Bay Area has dramatically increased since the start of the pandemic.

Six men in custody are being charged with hate crimes after San Jose Police arrested them following at least 170 incidents in the past year. Leaders don’t want residents in San Jose, especially in Little Saigon to be fearful this holiday season and beyond.

“While we live in different places and our families came from different countries, we take your safety seriously and we take it personally,” Santa Clara Co. District Attorney Jeff Rosen said.

Backing up these words, San Jose police made six arrests since September after an extensive investigation.

Anthony Robinson of Stockton, Cameron Moody of East Palo Alto, Derje Blanks of San Jose, Hassani Ramsey of Oakland, Clarence Jackson of East Palo Alto and Malik Short of Tracy have been linked to at least 170 incidents of robbery, theft and burglary that targeted members of the AAPI community.

Police say these men specifically targeted more than 100 women because they were Asian American.

“An attack like this is really an attack against the basic premises of this country that as Americans, we are all entitled to equal and fair treatment under the law and that we should all treat one another with respect,” Rosen said. “So, because of those reasons, we charged this as a hate crime.”

Police brass as well as county and city leaders met with community members at Grand Century Mall in East San Jose Tuesday to further build the important bond between law enforcement and city residents.
The same bond that helped officers arrest the suspects through key witness accounts of the attacks.

“The City of San Jose stands together to ensure the safety of people in Little Saigon,” San Jose City Councilmember Maya Esparza said. “We will not stand for hate crimes here at all.”

At least one of the suspects is facing upwards of 95 years in jail if found guilty.

The demand for white racists attacking innocent Asian bodies across America is great; the supply turns out to not only be limited in nature, but actually black.