Four little children, the oldest just eight years old, were murdered by their father Friday morning in Louisville. The family members were Somali refugees who had been resettled in a housing complex where other Somalis lived.

The father, Said Biyad, turned himself in at the police station, saying that he had killed his family.

The family was known as "secondary refugees" because they originally settled in another city before coming to Louisville. Kentucky Refugee Ministries and Catholic Charities have helped settle hundreds of Bantu refugees directly to Louisville from foreign refugee camps in 2003.

Bantus and other Somalis have fled that nation's long-running civil war.

Dozens of neighbors, as well as Somalis from throughout the city, clustered near the crime scene during the morning and early afternoon as police continued to investigate.

A worker from Catholic Charities was on the crime scene of the killings to help interpret. [Children's bodies removed at Iroquois Homes, Louisville Courier-Journal 10/6/06]

Below is a photo of the local Somalis looking on to the crime scene. 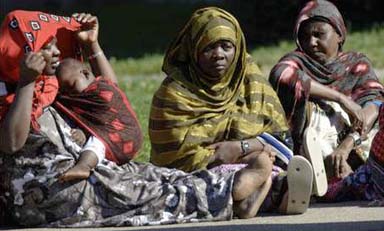 Somalis are among the most "diverse" people that America has ever tried to include in the national community. It hardly seems kind to import tribal persons who require instruction on the operation of doorknobs and electric lamps, but such neediness keeps many in the Refugee Industrial Complex gainfully employed. (See Cliff Notes Assimilation for Somalis.)

How much do cultural issues matter in crimes like this? Certainly we have plenty of Americans who commit monstrous crimes, such as the awful murder of the Amish children. But when the normal stresses of living are multiplied by being placed into a society that might as well be Mars to an African tribesman, it may seem impossible to imagine a solution to one's problems.

Perhaps Said Biyad would have murdered his family if they had remained in Africa. Or maybe not.