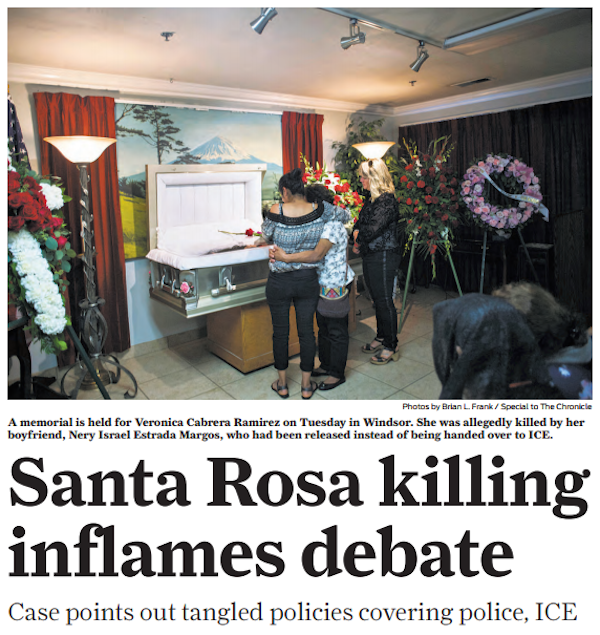 Two days ago, Brenda Walker called our attention to another lethal case of sanctuary-itis

Friday’s edition of the San Francisco Chronicle had a big front-page story about Veronica Cabrera Ramirez who had been murdered by her illegal alien boyfriend. Nery Israel Estrada Margos had been arrested by Santa Rosa police for abusing her, but instead of holding him for ICE agents to fetch for deportation to Guatemala, police released him and he killed her.

It turns out, though, that "but ... police released him and he killed her" isn't the whole story. It's infuriatingly worse.

Dan Cadman, a retiree from Immigration and Customs Enforcement [ICE] who's now a Fellow at the Center for Immigration Studies [CIS], has coined the term "malicious compliance" for what went down in the murder of Veronica Cabrera Ramirez. [The Human Cost of a Sanctuary County's 'Malicious Compliance' Policy, CIS.org, August 31, 2017]

Cadman points us to a Daily Caller article from a week earlier, the core passage of which is this:

Police released Estrada-Margos from custody on August 3 – despite a detainer request lodged against him by ICE officials – after he posted the required $30,000 bail.

“We did notify ICE of his release date and time. Sometimes they pick up, sometimes they don’t,” Giordano said.

What Giordano did not tell reporters was that Sonoma County gave ICE officials only 16 minutes to travel over 60 miles to pick up Estrada-Margos before releasing him from custody – a distance that according to Google Maps can take 90 minutes to travel.

James Schwab, ICE’s spokesman in San Francisco, documented the incident in a statement given to The Daily Caller.

“Immigration detainers serve as a legally authorized request, upon which a law enforcement agency may rely, to continue to maintain custody of an alien for up to 48 hours so that ICE may assume custody for removal purposes,” Schwab wrote. “At 8:20 p.m. the Sonoma County Sheriff’s Office notified ICE’s local office that Mr. Estrada was pending release. The Sheriff’s Office then released Mr. Estrada 16 minutes later at 8:36 p.m.”

Schwab noted that the “vast majority” of notifications that ICE receives from Sonoma County, especially over the last six months, “have failed to provide sufficient advance notification to pick up these criminals.”

So why does CIS's Cadman call this "malicious compliance"? Well, sanctuary jurisdictions (of which Sonoma County is one) are threatened with loss of federal funds if they refuse to cooperate with ICE, which generally means refusal to honor ICE detainers. And that means refusal to notify ICE that the jurisdiction will be releasing a detainee (an example being San Francisco's hyper-notorious Steinle case).

But the Sonoma County Sheriff's Office has apparently perfected the cynical ploy of notifying ICE of such releases—thus "complying" with ICE's detainer requests—while also insuring that the illegal aliens (and, presumably, other alien miscreants) walk free.

The current chief cynic in Sonoma's Sheriff's Office is Interim Sheriff Robert Giordano, appointed after elected Sheriff Steve Freitas retired at the end of July. If you (especially Sonoma County locals) would like to give the county's outpost of The Swamp a completely-deserved verbal thrashing, the number to call is probably (707) 565-2781.

Also, locals should keep in mind that sheriff is an elective office there.

Actually, in Sonoma County, the office is Sheriff-Coroner. So, who knows—maybe a succession of Sonoma sheriffs have favored sanctuary policies as a way to help keep their coroner operations busy.

Below the belt? Uh, uh—with public "servants" like these, nothing is below the belt (and whichever read you give to "nothing" there, you're right).

Article
Yes, Virginia (Dare), COVID Could Have Been A Chinese Race-Based Bioweapon 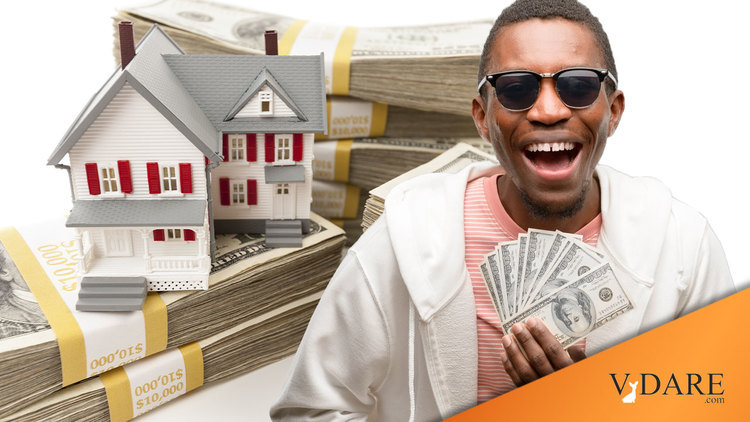 Post
Buzzphrase Alert: "Generational Wealth" (="White People Have Too Much Of The Money")
MORE...
POPULAR TAGS