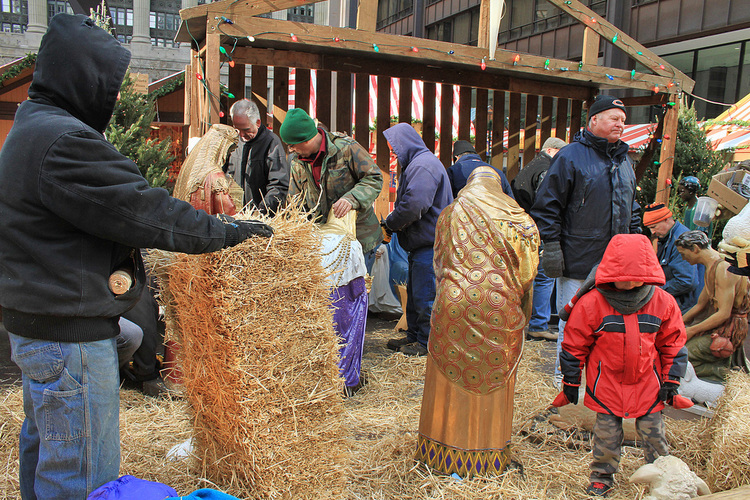 Speaking Of Victory In The War On Christmas, 31 State Capitols Had Nativity Scenes—AFTER An Intense Legal Battle

From a report last month:

At least 31 of the nation’s 50 state capitols will have Nativity Scenes of Christ’s birth in December 2020 and one of the attorneys behind the legal campaign defending such religious expression in the public square is confident the day is coming soon when every state will have such exhibits.

“The nativities are going up in more than half of the states and it’s based on a free-speech rationale that is very hard to defeat,” Thomas More Society Founder Thomas Brejcha told HillFaith Friday. “Even the American Civil Liberties Union (ACLU) in Illinois and Texas publicly said we were totally justified in doing so.”

Brejcha said he has no doubt at all that within a few years there will be Nativity Scene displays in the capitol rotundas of all 50 states.

“I don’t have the slightest doubt about it. We may have a fight or two, but my response is ‘bring it on,’” he said.

DID YOU KNOW: Majority Of State Capitols Will Have Nativity Scene Displays In 2020; More To Come, HillFaith, November 21, 2020

And that's the point—there is a fight, from people who hate Christmas and Nativity scenes. That's what the Thomas More Society, a group of Catholic lawyers, has been fighting in America's courts.

And how will that fight go during the next presidential administration?

Brejcha told HillFaith he worries that the potentially incoming presidential administration of former Vice President Joe Biden will throw up roadblocks to Nativity Scenes and other forms religious expression in the public square that are protected by the First Amendment.

“We may have a lawsuit, especially if the new regime comes to power in D.C., they are not supportive of religious expression in the public square, so we may have a fight or two,” Brejcha said.

The thing is, Nativity scenes aren't only the target of atheists and the ACLU, they are targeted with actual violence, as Tom Piatak pointed out in January:

The first War On Christmas item that caught my eye this year and the most notorious each had this in common: they explicitly declared that public celebrations of Christmas were “fascist.” In mid-December, I read that a living Nativity Scene featuring children in Toulouse, France needed to be shut down when the event was disrupted by protestors shouting “Stop the Fascists!” [Nativity scene triggers activists; Dozens scream 'stop the fascists!' at children, by Douglas Ernst, Washington Times, December 19, 2019]

And as I've said before, in America's supposedly metaphorical War On Christmas, arson of nativity scenes is not unknown, and vandalism is epidemic.