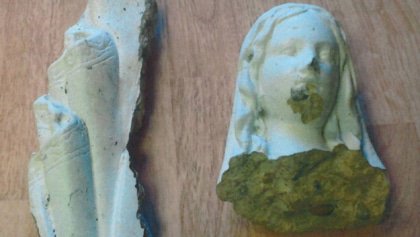 Police on Long Island report a statue of The Blessed Virgin was beheaded over the weekend.  Surprisingly, the locals are dealing with this as a hate crime.  The usual course taken in these desecrations of Christian images is a sleepy round up of the usual teenage vandals, followed by not much.

"A reward of up to $5,000 is being offered for information that leads to an arrest.

Anyone with information is asked to call Suffolk County Crime Stoppers at 1-800-220-TIPS. You can also text “SCPD” and your message to “CRIMES” (274637) or submit a tip by email by clicking here."

Such attacks are not uncommon.  Local officials treating them seriously is less common.

So, bravo Port Jefferson NY Police. You will not need much help in identifying those determined to destroy religious images.  But a hint is in order.  It wasn't the Mormons.

I remember an account of an individual attacking the statuary in the Cathedral of the Sacred Heart in Newark NJ not so very long ago.  No description was posted in the press but he was quoted as saying that the statues were "Against my religion," as he was carted off.  I was never able to find any follow up reporting.

Like many reactionaries, I have deep qualms about Hate Crime Legislation.  Ideally, there should be no such legal category.  If we are all equal under the same law, the concept of special laws for any one particular group cannot help elevate one group over others.

It's good to see hate crime law applied to actions against the majority for a change.

[Crossposted from Odysseus On The Rocks]